Man with a Blue Scarf

It’s always reassuring to a painter when there is a proliferation of big names making headlines in the painting genre. Painters frequently take a back seat to installation, performance, video art – the so-called “cutting edge” art and have to live with comments like "painting is dead"
Some of this attention has been brought about by the sad passing of some of the great names –.Cy Twombley  and Lucian Freud to name just two. 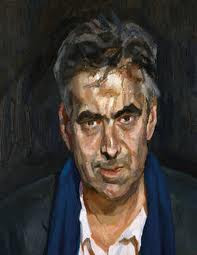 One aspect that struck me profoundly was the patience, persistence and sheer dogged determination Freud employed while painting this portrait, and indeed to all his work. Day in and day out; slogging labour; over a period of some twenty one months. During this time there were natural breaks but essentially there were about five or six sittings each month. Each evening sitting lasted about three hours, after which artist and sitter would go out for dinner.

The portrait is painted in slow sections, as seen in the incomplete portrait of Francis Bacon.
Freud “is inclined to put a blob in the middle then slowly work out from it, creating a mosaic pattern of pigment that spreads across the canvas” said Gayford.

Freud would often be working on two or three canvasses simultaneously. Each would be painted at the same time of day so that the light for each would remain constant. The sheer physical endurance of this regime – each session often lasting two to three hours – continuing in the last years of his life – one can only admire the commitment to hard work. 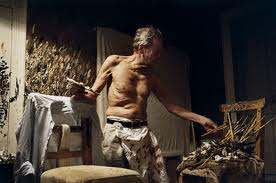 He drew praise from many – including, surprisingly, Damien Hurst who said:

"What I love about Freud is that interplay between representational and the abstract. His work looks so photographic from far away, and when you get close up it’s like an early de Kooning. You can always tell a great painting because when you get close there are all these nervous marks."

And then when speaking to Lawrence Gowing, Freud said he wanted his paint to:
"work as flesh"  and

"I know my idea of portraiture came from dissatisfaction with portraits that resemble       people. I would wish my portraits to be of the people not like them. Not having the look of the sitter but being them."

Lucian Freud Portraits is currently on show at the National Portrait Gallery. A review of the exhibition by Katherine Tyrrell of Making a Mark is here together with an interview with David Hockney on his experience on sitting for a portrait.

Today I received a belated Valentine from a fellow blogger. I commented on a post Giving away my heart  on Jeanette Jobson’s blog  Illustrated Life and was chosen to receive a heart. 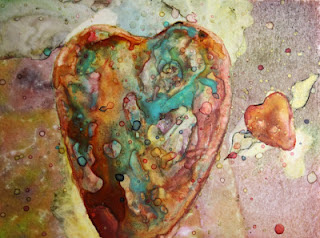 I loved the way she turned a mistake, printing on the wrong side of photographic paper, to her advantage by experimenting on the shiny side of the failure to create a beautiful image.

How often do we scrunch up a piece of paper in disgust and toss it in the trash without giving a thought as to how we could turn the failure around?

The next time you are faced with failure – stop and think – what can I do to turn this around?

Why not add a little colour to your favourite image?

My page "Pencil and Pastel portraits" has been updated to include pastel portraits. There is now an option to have portraits supplied unframed.

A Portrait in Pastels

Portraits are an interesting challenge. For children’s portraits, I work from photographs as it’s easier to have a static subject. I admire artists who paint children from life. In fact, even those who photograph children have my admiration. This new portrait was completed recently and I needed to return a second time to take more photos. It’s a skill requiring much patience. The window of opportunity for a good shot is fleeting. 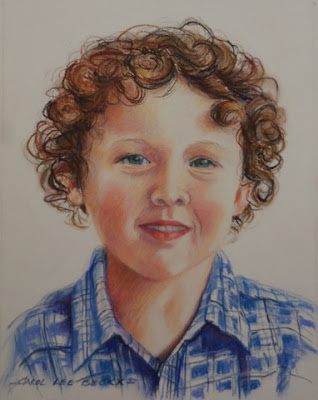 The portrait is in pastel and I loved working with the medium again after a break. I realised once I started that I need to add far more colours to my palette. When one works mostly in oils there is no need to have hundreds of tubes. One can mix endless colours from a few basic colours.

I enjoyed the process and it was good to change and do a portrait in colour after using only  graphite and charcoal.