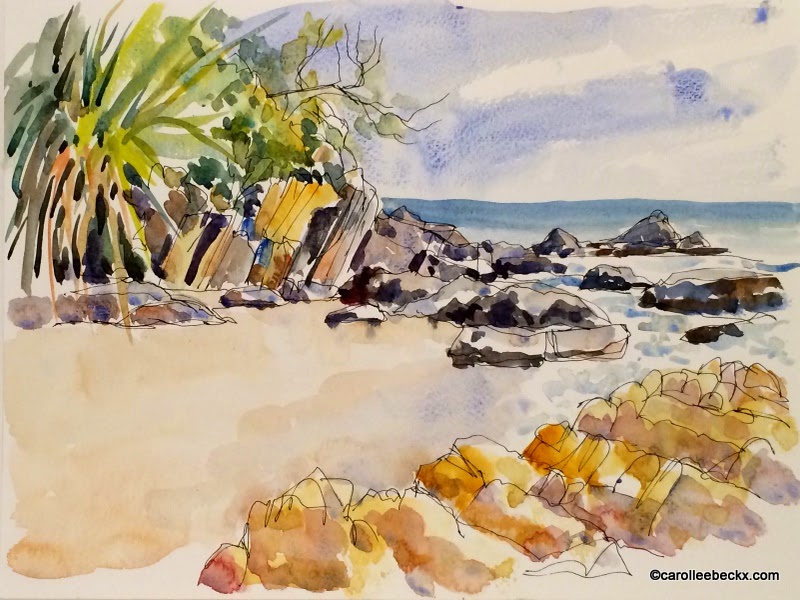 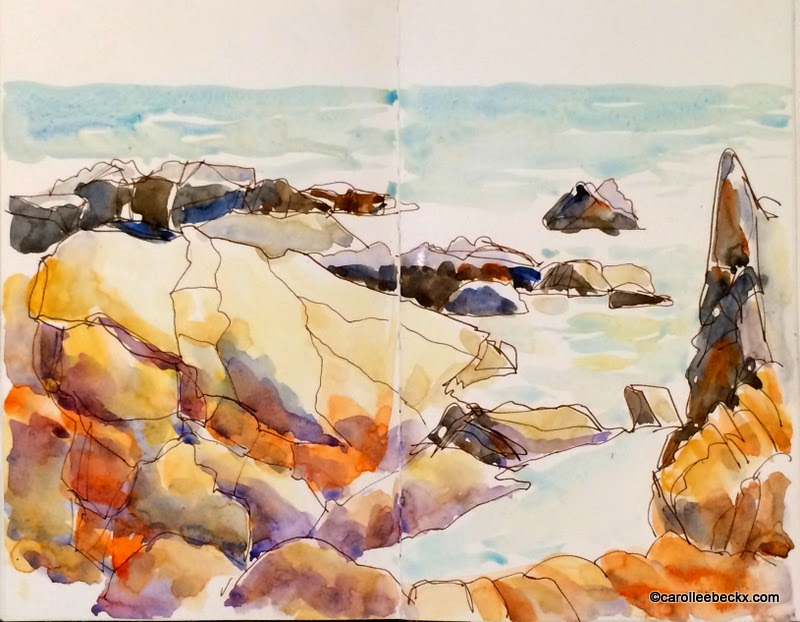 Happy New Year - I wish you all creative good things for 2015
Posted by Art Matters at 10:46 No comments:

While holidaying here at Coolum Beach I have been venturing out early in the morning or late afternoon so that I can escape the heat of midday. Yesterday I was hoping to park near First Bay but everyone else had the same idea. Instead I stopped at the lookout at Point Perry and looked down on the bay.

I was looking for some shade and found a little patch on a bench. I could spread out my painting gear in comfort and I had a view of the beach below - if I looked between some trees.

My painting was almost finished when a couple with a little girl approached me.
They asked if they could see what I had been doing.
"Your colours are the colours if heaven," she said. 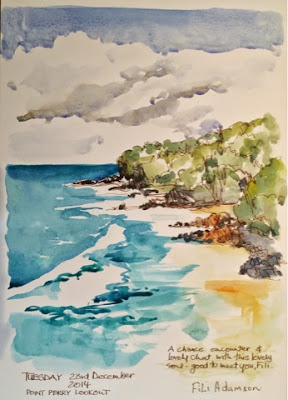 We had a lovely conversation- of the sort that is unexpected and special. This is one of the joys of sketching - that connection with someone that makes your day.

I asked her name - and she wrote it at the bottom of my sketch. Then on impulse, I asked if I could take a photograph of her. Last night I painted Fili's portrait - a special soul. 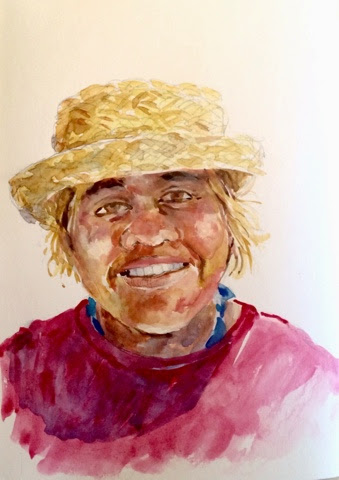 And now on Christmas Eve, I wish you a happy, relaxed day tomorrow.
Posted by Art Matters at 15:32 No comments:

My wishes for you at Christmas 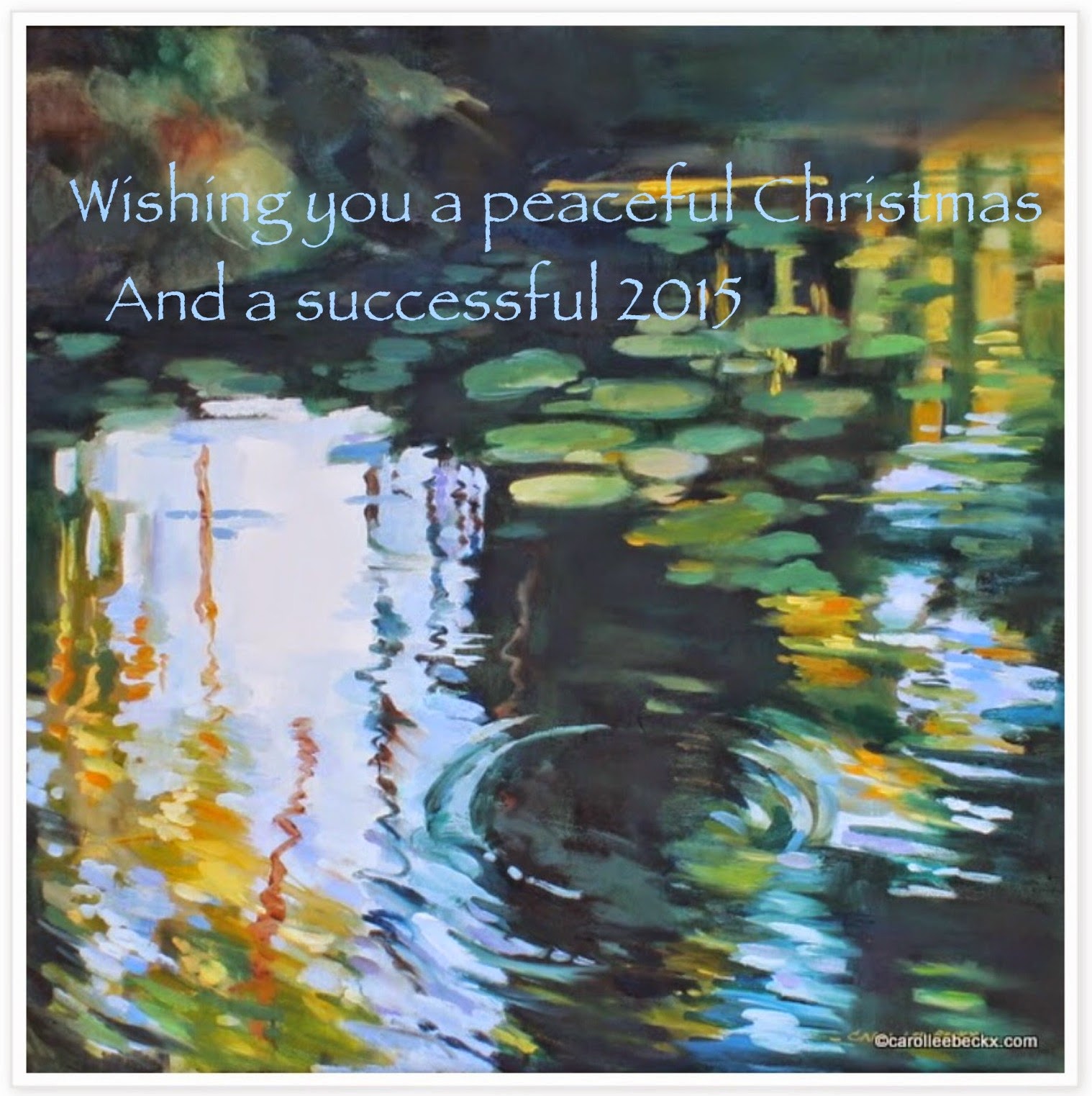 When I was deciding what image I should share with you this year, I decided that after a year of challenges and stress, we all need a little tranquillity in our lives as we celebrate Christmas and prepare to start a fresh year.

I do hope that you will find some time to relax, unwind, sleep late, read a book, go for a walk, and recharge your batteries.
Please enjoy “Deep Ripple” it comes with my love and very best wishes.


Carol
Posted by Art Matters at 12:18 No comments:

When I asked my client what her Mother's name was, she looked surprised. She replied: "Her name is Phyllis but everyone calls her Nana." 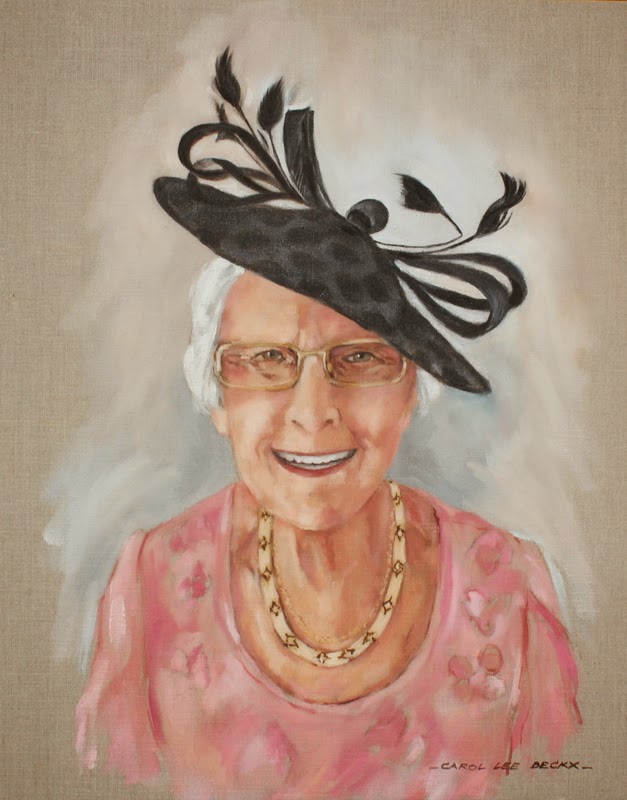 This portrait was done from a tiny iPhone photo - she didn't want any other photos taken of her and when you are 91 then no-one argues with you - and in any case the portrait was to be a surprise.

However I was able to borrow the hat - Nana's Melbourne Cup hat. If you're Australian you will know about the race that stops a nation. Everyone, everywhere, frocks up and goes off to lunch. A hat or fascinator is obligatory.

Painting a portrait from a photograph can be really tricky but somehow the spirit of this remarkable lady came through and the painting evolved without too much of a struggle. The natural colour of the linen support avoided the usual "background" problems. It seemed logical to leave a lot of the linen unpainted so that the emphasis is on the portrait.

When I get to the finishing off stage of a painting I like to hang it in my living room for a while to assess what still needs to be done. Nana's portrait has been keeping me company for the last week - I'll miss her.

My local café has some exciting changes. There is a new roof over part of the café.
This creates a lovely cool alfresco dining area. There is shade and coolness during these steamy days. Then, when we are lucky enough to have some rain, no-one has to scramble for cover.

In keeping with the décor of the Café, a coat of bright red paint enhances sections of the walls of this new area. I have done three paintings of Paris, The Arc De Triomph, The Eiffel Tower and Notre Dame de Paris.
I made good use of Google Earth street view. It's the next best thing to being there in real life.This photo shows the three paintings all together. 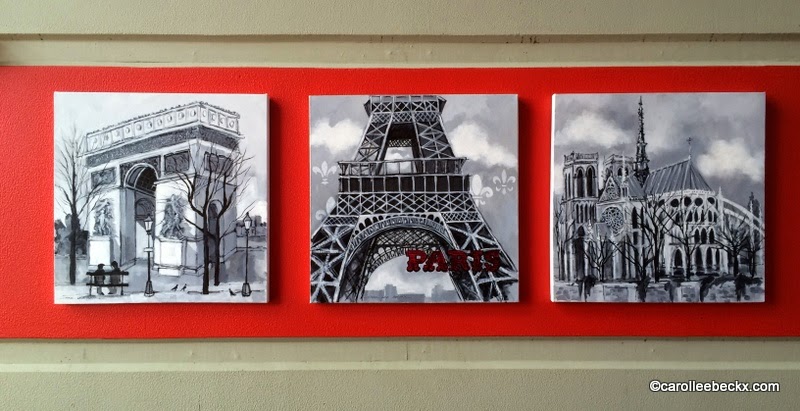 These paintings have the same colour palette as the large interior mural and keep to the Parisienne theme of Deja` Bru Cafe`. There’s a difference though, these three paintings are for sale.
If you are interested in purchasing any of these paintings please contact me or the Cafe` staff. 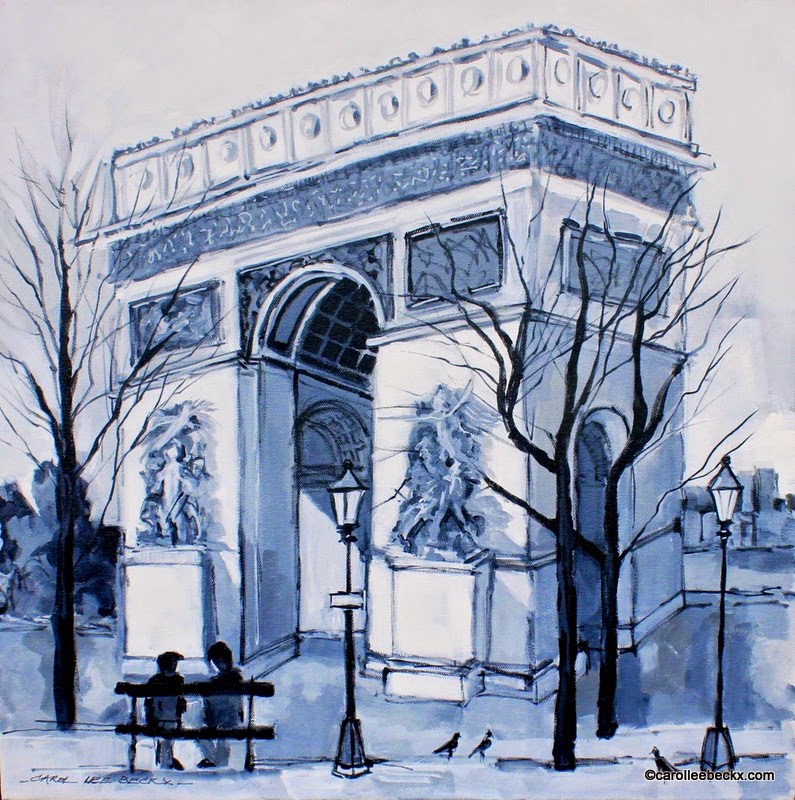 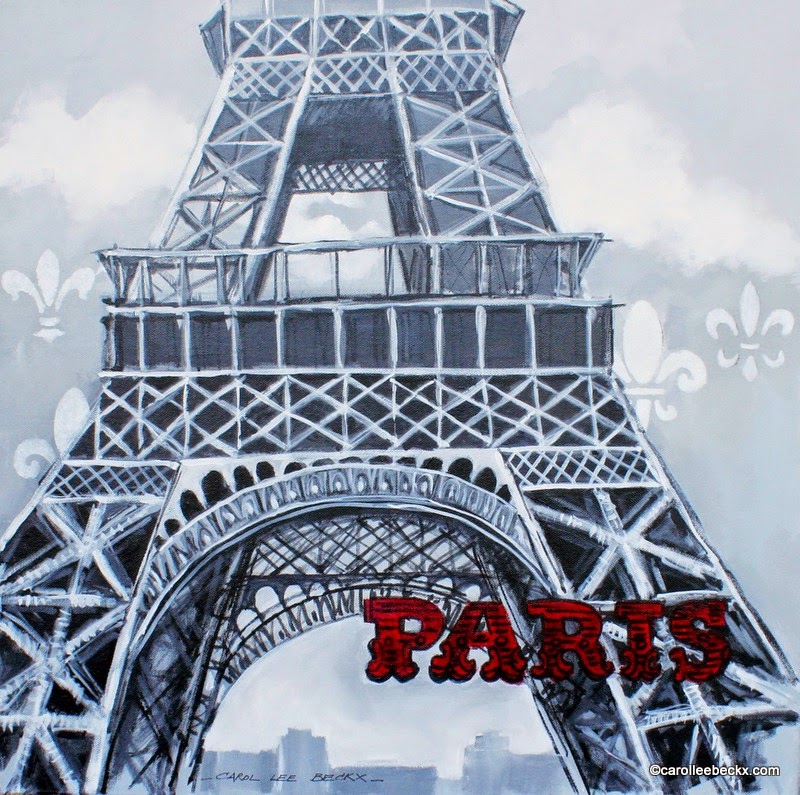 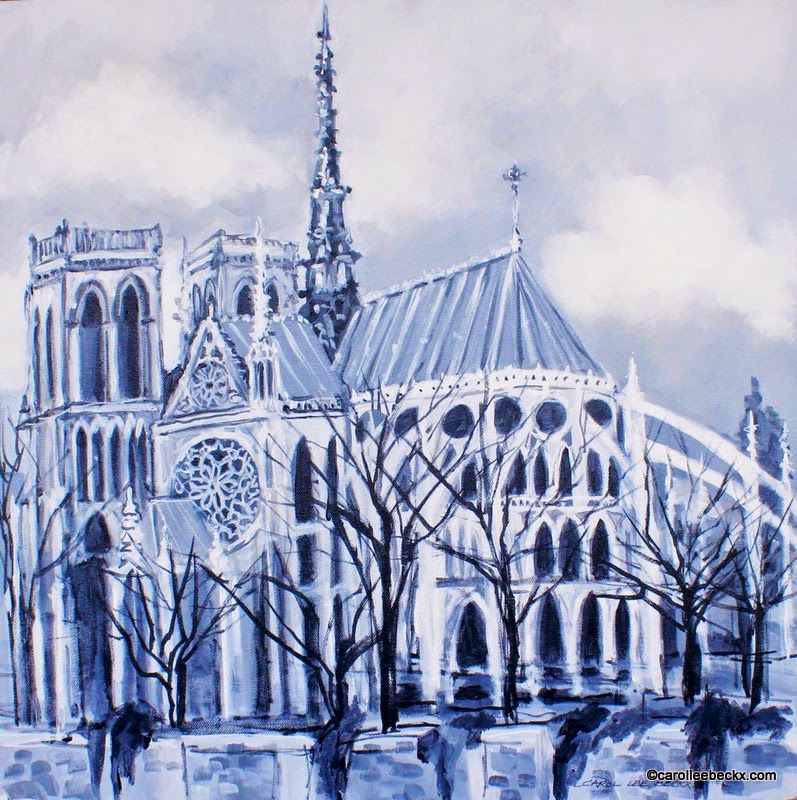 And here's a reminder of the interior painting... 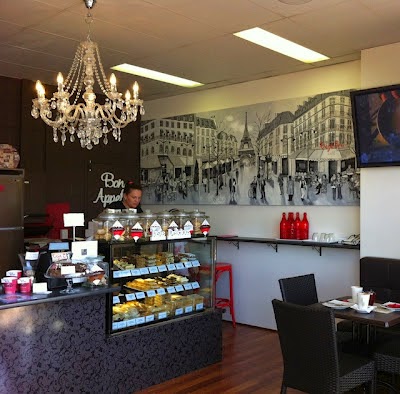 A workshop with a difference - a Hen's Painting Party

The best thing about teaching art is that you get the opportunity to introduce people to abilities they don’t think they have. Usually the classes and workshops in my studio are attended by people who have done some drawing and painting, even though it might had been years since they picked up a brush. More often they will be regular students at the studio.

Yesterday afternoon my studio was filled with enthusiastic novices. It was a Hen's party with a difference. (And in case you’re wondering there was no life model in attendance.) 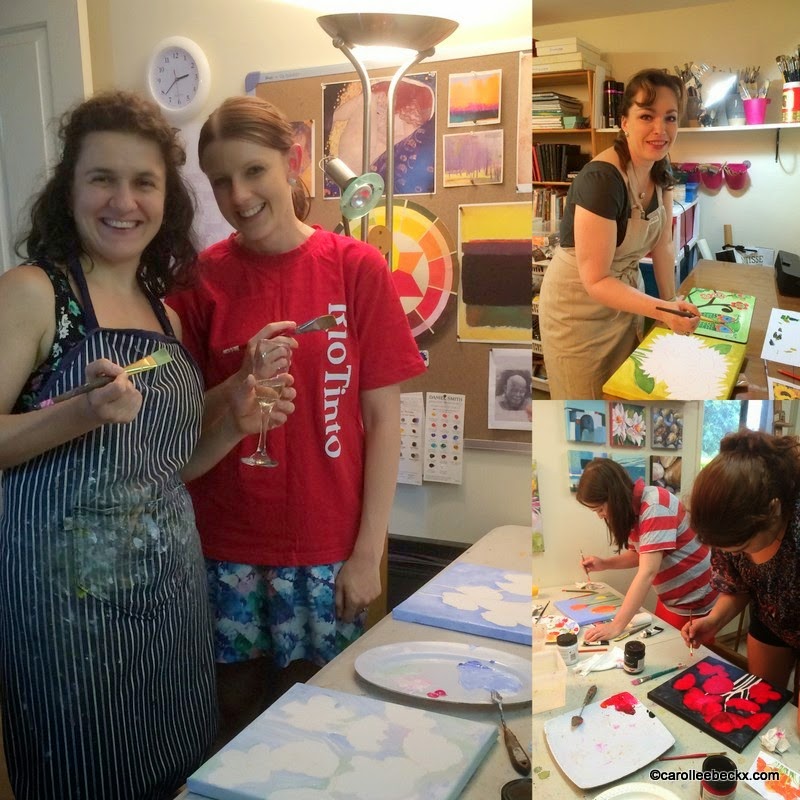 I had some ideas prepared for my guests - photographic reference and some templates; small canvases and plenty of acrylic paint in rainbow colours.

After a glass of bubbly to start, I gave a brief explanation and the ladies started creating their paintings. 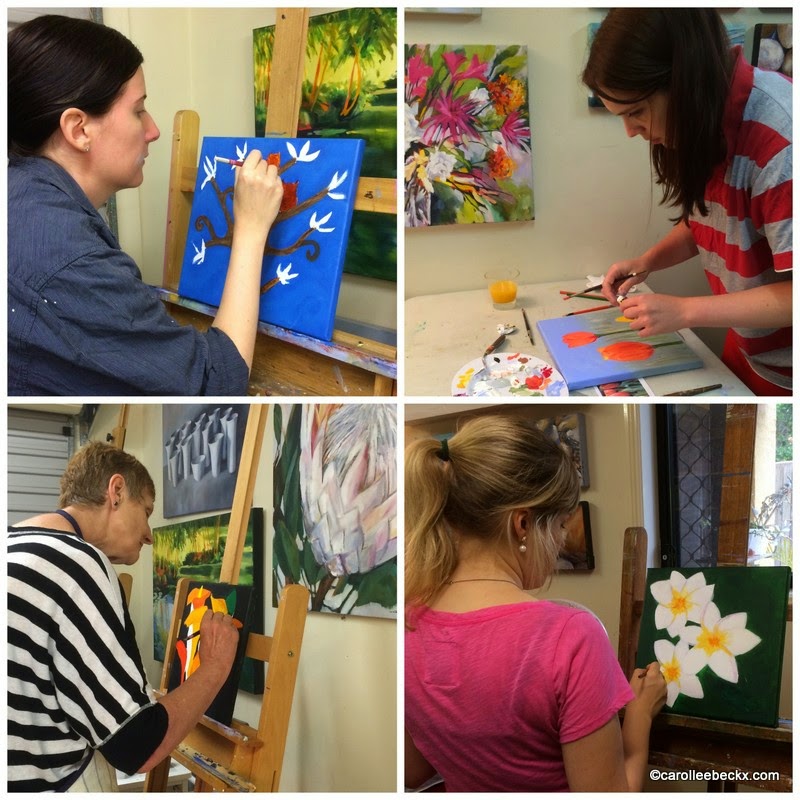 Once the paintings had progressed somewhat it was time to let the paint dry and take a break for snacks and delicious cake.

Three hours later and all the guests went home with a completed painting. I think they surprised themselves. I love introducing people to the fun of painting - I had the most enjoyable afternoon. 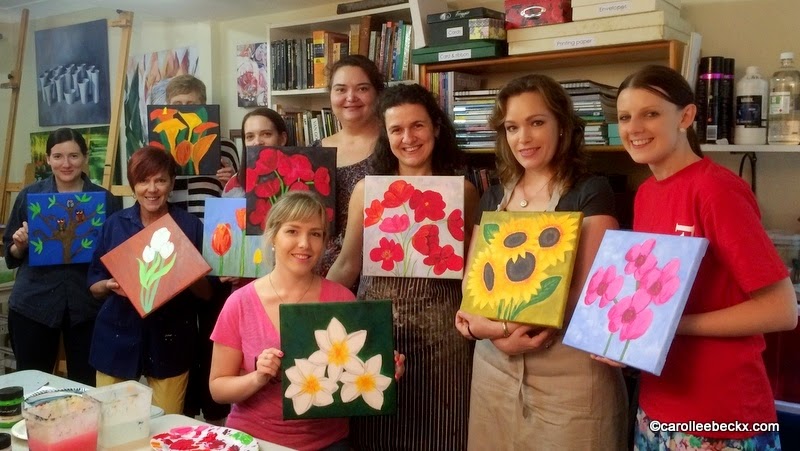 And  to Tania - a most capable assistant - a special thank you.
Posted by Art Matters at 08:48 No comments: