﻿A commissioned portrait makes the ideal gift﻿﻿ on the occasion of a new arrival in the family, a birthday or simply to have a lasting memento of a someone special.
﻿
Please have a look at the two new pages that are listed on the top right hand side of my blog. These pages, Pencil Portraits and Portraits in Oil  give details of how one can commission a portrait.

Cleaning up Brisbane - and back to work

When I wrote about the current exhibition on at GoMA Brisbane I didn’t dream that the galleries would be under threat and then flooded. I had planned to write a follow-up post on other exhibits on show. Then the floods struck and life was turned upside down. My resolutions of doing something everyday were also scuppered – painting in a house with seven children under seven years old was not feasible. It also seemed slightly frivolous to be trying to paint at a time when so many people had lost their homes and businesses.
But the resilience of people in my new city is uplifting and inspiring. In flooded areas complete strangers arrived armed with their gumboots, shovels gloves and brooms to clear the mud form the city.
So back to the Exhibition 21st Century: Art in the first decade. The artworks in the galleries were moved to the upper levels and none were damaged but the buildings in the Cultural Precinct will be closed for some time.
When the galleries re-open, I am not sure whether the Current exhibitions will be extended or whether future planned events will take their place. Nevertheless, I want to talk a little more about some of the works that I enjoyed during my previous brief visit.
This gallery space was a wonder of colour and texture on a large scale. Viewers are dwarfed by Tayou’s huge brightly coloured assemblage Plastic bags 2001–08 hanging from the ceiling. This assemblage is made of thousands of coloured plastic shopping bags - the use has transformed the ‘throw away’ into something beautiful. 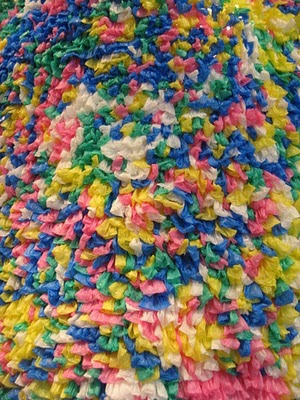 It’s extremely tactile – people kept reaching out to touch. The Gallery attendant was hard pressed to keeping the viewers away form the work. Some were  prompted to lie underneath it – as though daring it to break free from the ceiling and envelop them.The Gallery website notes on this work call it: 'an ominous spectacle of consumerism' 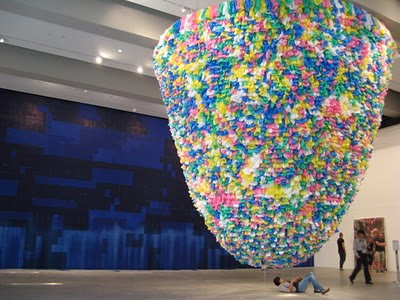 ﻿
Left/Right Side by Carsten Höller is a source of great fun for kids – they can slide from the upper floor of the foyer down to the floor below. The shiny sculptural stainless and polycarbonate shapes sweep the children swiftly downwards. 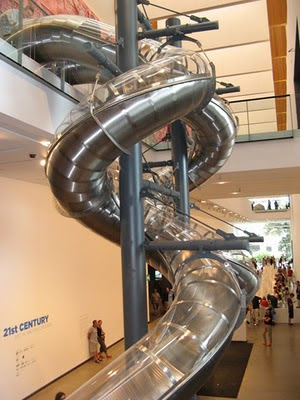 We usually associate Lego with brightly coloured blocks – the transformation to white makes them recognisable but so different. The cubic structural evolution project 2004 by Olafur Eliasson ran the length of the Lower gallery space. It is a project where  children can create an ever changing metropolis using white Lego blocks. 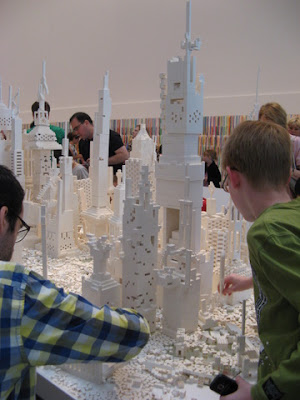 The activity isn’t confined to children however – there were a number of adults as engrossed in construction as the children. As a counter-point running along the adjacent wall was the brightly coloured I wish your wish.
﻿The Bentinck Island artists are a group of very senior female painters of the Kaiadilt people who live on Mornington Island in the Gulf of Carpentaria.
The artists have said: We have painted one of the most important places on Bentinck Island. This is where King Alfred was born. This is his country. King Alfred was Sally's big brother and he was also Netta's father. He was famous as strong warrior and leader, he was feared by other tribes. This place is special to all seven of us. We all have close connection to this country. That is why we picked it as painting for us to do together 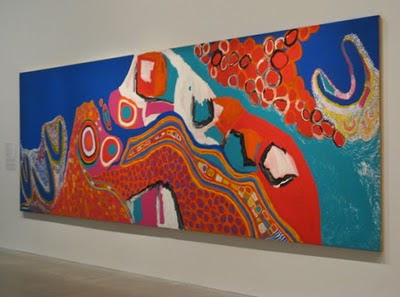 You can read the previous post on this exhibition here.
So now I'm moving forward and making another start.Just in case you think I've been completely idle I will be posting what I've been doing soon - no more long delays between posts!
Posted by Art Matters at 09:56 2 comments:

As I write this, I am watching TV news coverage of the enfolding flood crisis in Queensland. I did not imagine that barely a month after arriving here in Brisbane, my adopted city would be facing a disaster of this magnitude.
Today the sun is shining but this will not change the ever rising flood waters. A little earlier I heard a helicopter overhead – the one positive thing is that the clearing weather will enable search and rescue teams to start the heartbreaking task of searching for flood victims.
When I visited the city previously, I took a ride on the Citycat ferry – now not running because of debris in the river – this photograph is of the Eagle Street jetty in better times. Now the jetty is under water and the level of the river is only likely to reach its peak tomorrow. The Couriermail Mail Gallery has photos of the many parts of Bribane that are flooded. Jan 12: A tug in the Brisbane River near the Eagle Street Pier. Picture: Peter Wallis
Last week when I parked my car for my visit the Gallery of Modern Art I did not imagine  that the car park entrance would look like this. When I wrote the previous post,  New delights to discover  – a flooded city centre was the furthest thing from my mind.  Now I imagine the Galleries, City library and Museums are taking measures to protect the buildings from the rising water.
These images are going to be replaced by far worse in the coming days.

The following image is of the 1974 Flood level marker in the Brisbane Botanic Gardens taken in 2007. Levels this time are predicted to far exceed these levels, as high as 5.5 metres.
﻿ ﻿
Yesterday morning our family started the day as usual – going to work and doing some grocery shopping.  As conditions deteriorated, we hastened to complete essential tasks, abandoned other plans and returned home early. We are  planning to stay in until the situation improves. Fortunately we do not live near the large rivers, but nevertheless we will be affected as supplies to shops become problematic.

I am thankful that my family is safe. My thanks to the many friends who have been checking to see that we are safe. My heart goes out to the many people who have suffered devastating losses. We can all only work together to rebuild and recover.

One of the joys of being an artist in a new city is that there is so much to discover. I  had visited  Brisbane's Gallery of Modern Art previously, so it's good to know that I will be able visit often and have to so much inspiration on my doorstep.

The current exhibition -  21st Century : Art in the first decade was simply such fun. What really made an impact on me was  the busy, happy vibe of the exhibition - the space was crowded with people - young old and in between.  Many of the exhibits involved audience participation, especially aimed at children. In fact, the Gallery has a programme called 21st Century kids designed to encourage younger members.

Admittedly, outdoor Brisbane hasn't exactly been the best lately with all the rain, so perhaps it was inevitable that the exhibition should prove popular. However, I didn't get the impression that people were hiding from the weather - they all seemed to be absorbed in the art.

A sense of fun and excitement filled the space. One installation was a room filled with the most beautiful  purple balloons - approximately 3000. Both parents and children were suitably armed with identification tags and could then go inside the room to play in amoungst the balloons which swamped small kids - here and there you could see a parent's head pop above the mass of moving, jumping,colour. 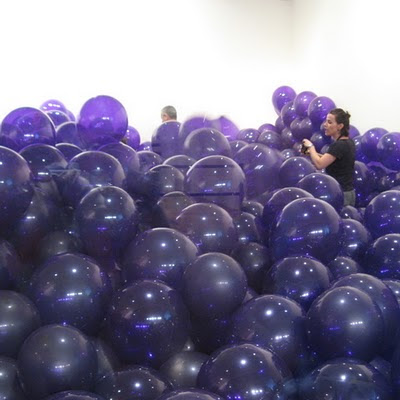 and more moving colour....as every now and again the mass of balloons would explode upwards as they popped high up into the air.

﻿ ﻿
There was another wall running the length of the central foyer that is festooned with brightly coloured silk ribbons. I wish your wish is the work of Brazilian artist Rivane Neuenschwander 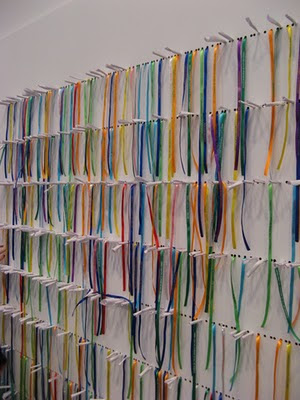 Visitors select a wish – printed on the ribbons, tie it around their wrist and replace it with their own wish written on the slip of paper provided. it is believed that when the ribbon wears away and falls off, the wish will come true.


The wish I selected was – I wish I had all the books in the world – this seemed a touch greedy so I replaced it with the following: I wish to write a book one day, just in case my wish comes true.
Posted by Art Matters at 07:49 No comments:


This type of minimal image fascinates me.
There is very little happening, and yet the subtle shadows and restricted palette of grubby blues and greys create, I hope, mood and atmosphere.
Posted by Art Matters at 21:43 No comments:

This little silver jug has been in my son-in-law's family since April 1876. It's so reassuring that some things have been treasured and passed down through the generations.

Our society is so focussed on the here and now. Essentially we live in a world where so much is transient and disposable. Even family photographs seldom make it to a printed form but live in a digital format only.

What legacy will we leave our children?
Posted by Art Matters at 18:50 2 comments:

The vertical repetition of the trunks of the trees caught my eye - I enjoyed their regimented formation. The light bark created a dramatic contrast to the dark foliage beyond.
Posted by Art Matters at 17:07 1 comment:

This small painting was done after I returned from a very muddy walk through the forest. The weather teases us with a day of sunshine and then the next minute the heavens have opened again and the ground is mud.

Further north,both inland and on the coast many towns and cities in Queensland have been submerged by floodwaters. Countless people have been left with nothing and their homes destroyed.

This afternoon we saw a rainbow so let's hope it is a signal that the flooding is at an end.
Posted by Art Matters at 22:21 No comments:

﻿ ﻿ I was going to have one of these tomatoes for lunch but I decided to use them for today's still life painting instead - maybe they'll be lunch tomorrow.
Posted by Art Matters at 21:35 2 comments:

I have decided to continue with the small landscapes and to have a second theme of small still life paintings. These three pears against the light were simply begging to be painted.
Posted by Art Matters at 21:34 1 comment:

I made a promise to myself that this year I would do something EVERY day, either a small painting or a drawing. I have been inspired to do this by a number of fine artists who do this every day regardless. One of these is Loriann Signori who recently won a Making a Mark award for her daily paintings. Another is Lisa Daria whose small paintings are a delight.She is also an award winner.

So I made a start yesterday with this small sketch of the stream and trees at Windarra, where I am now living. I didn't get around to posting it the same day though so I will have to do better! So this is really yesterdays' painting.

As I don't yet have a studio space set up, doing these small watercolours serve a dual function. I can do some painting with the minimum of space and fuss, and I can also get back into the swing of working in watercolours again.
Posted by Art Matters at 19:46 1 comment: