Walks along the beach are the one thing that I really miss about living here. Now before you say - but there are great beaches here - absolutely - but they aren't on my doorstep. I need to drive for a couple of hours rather than fifteen minutes down the road.

However, I have found Bunya Riverside. It is an idyllic spot close to my home. It is very tranquil with a path along the river bank, meandering between trees. Reflections fascinate me - there is the magical quality of doubling a beautiful vista.


My usual process is to work from plein air sketches and photographs. My aim is never a completely representational painting, but rather an image that has been edited, altered and transformed. Completing the painting away from the inspiration allows my inner sense of place to be foremost, rather than a slavish rendering of the scene before me.

The use of photographs originates from my years of living in South Africa where painting in the countryside was fraught with danger. Even stopping along the road to take photographs could often be extremely risky. Consequently, I am used to absorbing the essence quickly and then using the photographic images as a backup. 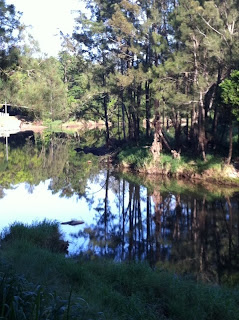 When an artist takes pictures it's hard to not to edit and compose to such an extent that when back in the studio one often wishes the zoom had not been so enthusiastic and that extra details just beyond the image were included. This painting started with a bright under painting of Permanent Rose and a mixture of Cadmium Yellow and Indian Yellow. There are two benefits: the under-painting gives the painting a warm tone and helps banish the fear of the white canvas.


I was so sure that I had some work in progress photographs bit either they are hidden in my vast store of photo files or I got so carried away that I forgot to take any. I do have some of the plein air sketches. These will give an idea of the origins of the composition. 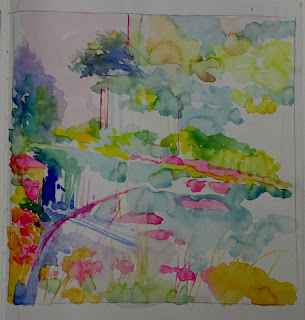 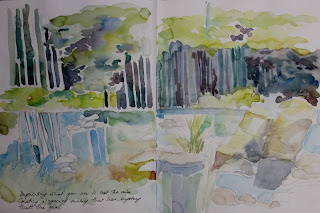 When I start a painting I refer to my sketches and photographs so I have a framework for the composition. Later in the process the photographs are abandoned as the painting takes on a life of its own. Occasionally, when I lose my way, I go back to the sketches and re-discover elements that I feel need to be included in the painting.


Knowing when to stop is an art in itself - and I'm afraid I don't really have an easy solution. I get to a stage when I feel there is nothing more to add - or remove.

This painting has been accepted for the Moreton Bay Regional Art Awards. The exhibition opens on Friday 11th October at the Strathpine Community Centre. You can view all the finalists here.