In a side road off the main bustle of the Gold Coast there is this delightful haven. It’s a coffee shop with a difference. Indeed, it's a Coffee Palace. The comfortable armchairs are upholstered in a range of wonderful brocade fabrics. There’s an eclectic mix of collectibles: shop mannequins, ostrich feathers, leather suitcases from a bygone era and sumptuous red swagged curtains with red roses everywhere.
Crystal Chandeliers provided a warm glow at the counter. Otherwise the lighting was subdued and restful. In another corner a tower of empty cigar boxes stretched to the ceiling and a bronze eagle swooped across the room. Alongside, an empty wooden birdcage provided a hook for the powder room key.


My tea was served in a delightful blue and white Chinese tea-set complete with a sprig of mint. Quotes painted on the table top provided reading matter. Ornate gilded mirrors reflected the crystal decanters that lined the window sills and multiplied the space crowded with so many interesting objects.

I was able sit for some time, undisturbed, drinking my tea and drawing.

Patisserie﻿ is one of my favourite paintings. It's the kind of painting that knew it's own mind from the start. It has also struck a chord elsewhere, as it has won 1st prize for Still Life at The Gap Community Art Show this weekend.
My other work on show, abstracts and still life paintings, contributed to my being awarded The Redhill Gallery Prize - gallery space at Redhill Gallery.
Posted by Art Matters at 08:15 No comments:

I took a walk through the forest at the bottom of the garden one afternoon. The light showing through the trees on to the creek was crying out to be painted. This painting - Sunlight on Bergin Creek is one of first of some larger works I have painted since moving here.


The Exhibition is at Hilder Road State School, Saturday and Sunday 10am - 4pm.This will be the first time I am showing work in my new country. If you are in the area please do come and have a look.

An  album with more images of the paintings on show are on my Carol Lee Beckx Artist page on Facebook.
Posted by Art Matters at 12:03 1 comment:

An artist's travels in Australia

Two Gold Coast Galleries
When I decided to move to Australia it was with the certain knowledge that I liked the country (at least the part where I would be living) I liked the people and I felt that I would be happy living there.
That said, most of this vast country is unknown to me – and it’s a huge undertaking to get to know even a small part of it.
A few weeks ago I went on a trip down to the Gold Coast. My only previous connection with this area was that a portrait subject of mine, Jordy Smith, a world champion surfer, competes in numerous surfing competitions there.
It’s a holiday destination. It’s a true surfer’s paradise with a laid back attitude to match. However, in a back street is a hidden treasure – a contemporary gallery –  19Karen – named after the road. It’s a transformed warehouse with high ceilings and expansive walls to display art. The day I visited there were a number of exciting exhibitions – I just wish it were a little closer but I plan to try to get there for some exhibition openings.
I loved the Anthea Polson Gallery. It’s a treasure trove of delights where many works of art of different styles jostle for attention. When I visited there were stunning photographs by Samantha Everton- Marionettes in the exhibition space.
Works in oil on linen by  Margaret Ackland– the exhibition titled “Worn” were stacked against the wall waiting to be displayed. These remarkable paintings portray antique garments and recall the detailed work of old masters.
These reminded me of a painting I did a few years ago with the title “Too late for the heirloom”. This was a portrait that included the family Christening robe in the background. A different dress was worn on the day because the heirloom was now too small since the ceremony had been delayed.
﻿ ﻿
Venturing down the coast
A trip to Byron Bay was essential, I was told. So off down the coast we went on a day trip. It was a glorious day – bright and hot. The first stop was Burleigh Heads. There's breathtaking view back towards the high rise buildings of the Gold Coast.
﻿ ﻿
I love travelling as there are so many interesting people that one meets along the way. At a view site I parked alongside this camper – clearly the owner had a very long –term project in mind. I couldn’t resist taking a photo! 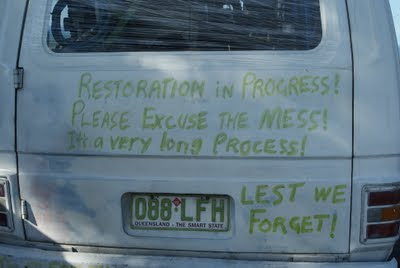 As a landscape painter, it’s a treat to discover new vistas. At Burleigh Beach there were huge rocks - similar to ones on Umhlanga beach that I have painted previously. 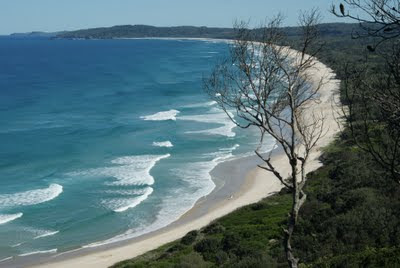 From the lighthouse at Byron Bay there were sweeping views of kilometres of sandy beaches. I'll be back to do more drawings and paintings.
﻿
﻿
Posted by Art Matters at 13:24 1 comment: