I have had an iPad for a couple of years now but when I decided to treat myself (actually a necessary business expense after all) to the 12.9” iPad Pro, I began to appreciate the freedom and creativity that came with the increased real estate. To have enough space to draw and view my reference at the same time, I could make the most of the new Procreate 5x.

The inspiration for my portraits comes from the generosity of muses on Sktchy. I have also benefitted from courses on Procreate with Lisa Fillion. She has a new bumper course which includes all previous portrait courses in one mega course - well worth the outlay. 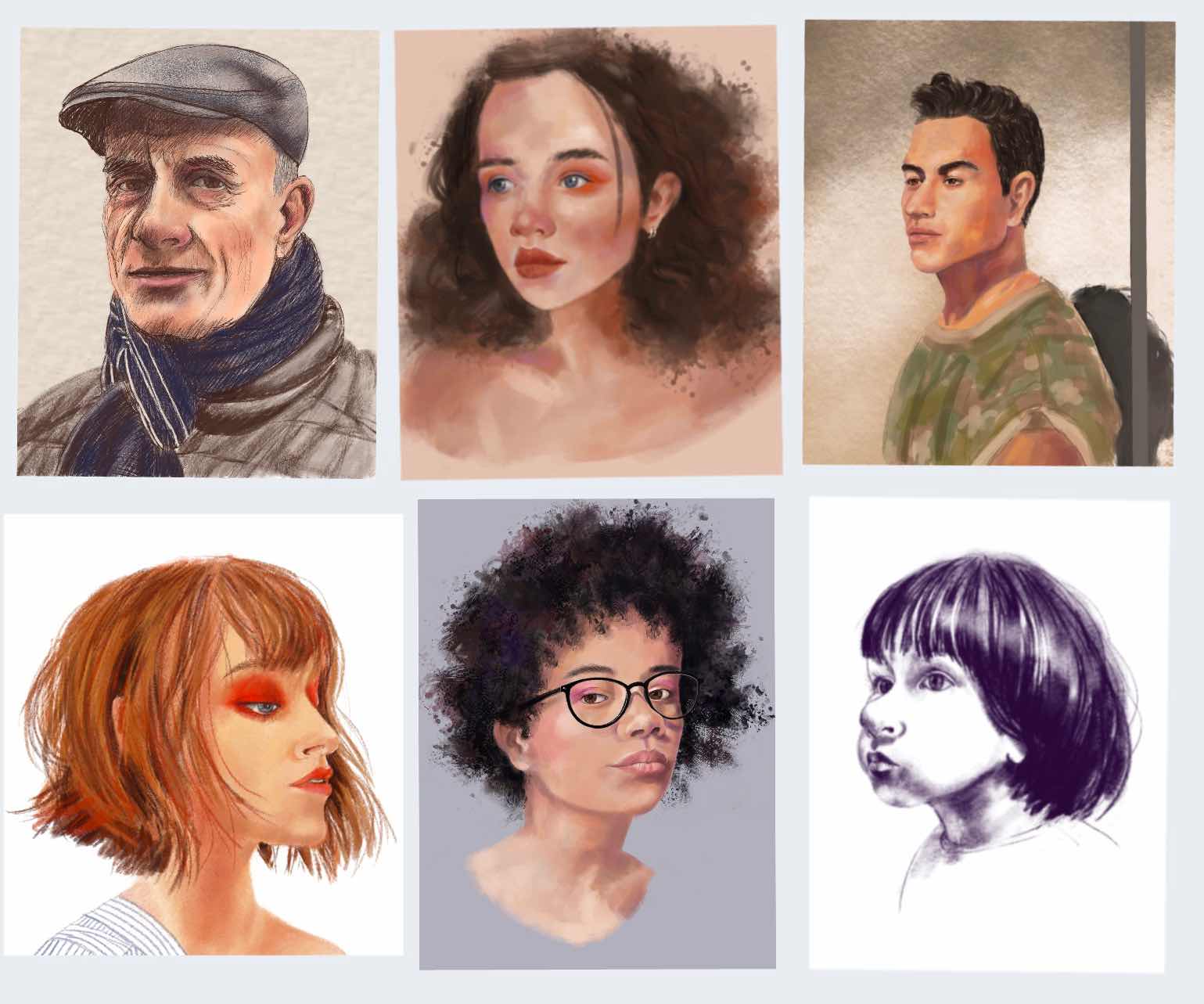 We love our pets. In fact, we are rather obsessed with our furry friends. Pets become much loved members of the family. They are pampered with every luxury. We take countless photos of them and the hashtags #pets #dogs #cats  #puppies #kittens are perhaps the most prolifically used on social media.
I love painting portraits of pets so I was delighted to receive a commission in December to paint a few favourites as Christmas gifts. These portraits are all painted in watercolour on cold press watercolour paper. They were ideally sized to fit into the matt of a ready made 6” x 6” frame, a creating the perfect gift.
Pet portraits have been commissioned frequently - you can view a few here.
And here are some Sktchy portraits
I am happy to customise the size and medium to suit, watercolour, watercolour and ink on paper or oils on canvas
Sometimes the proud owner has been included. One client loved the portrait so much he requested a second one as a gift for the vet who looks after the pet.
Allow me to introduce Lulu, Sophie, Primrose and Willow. 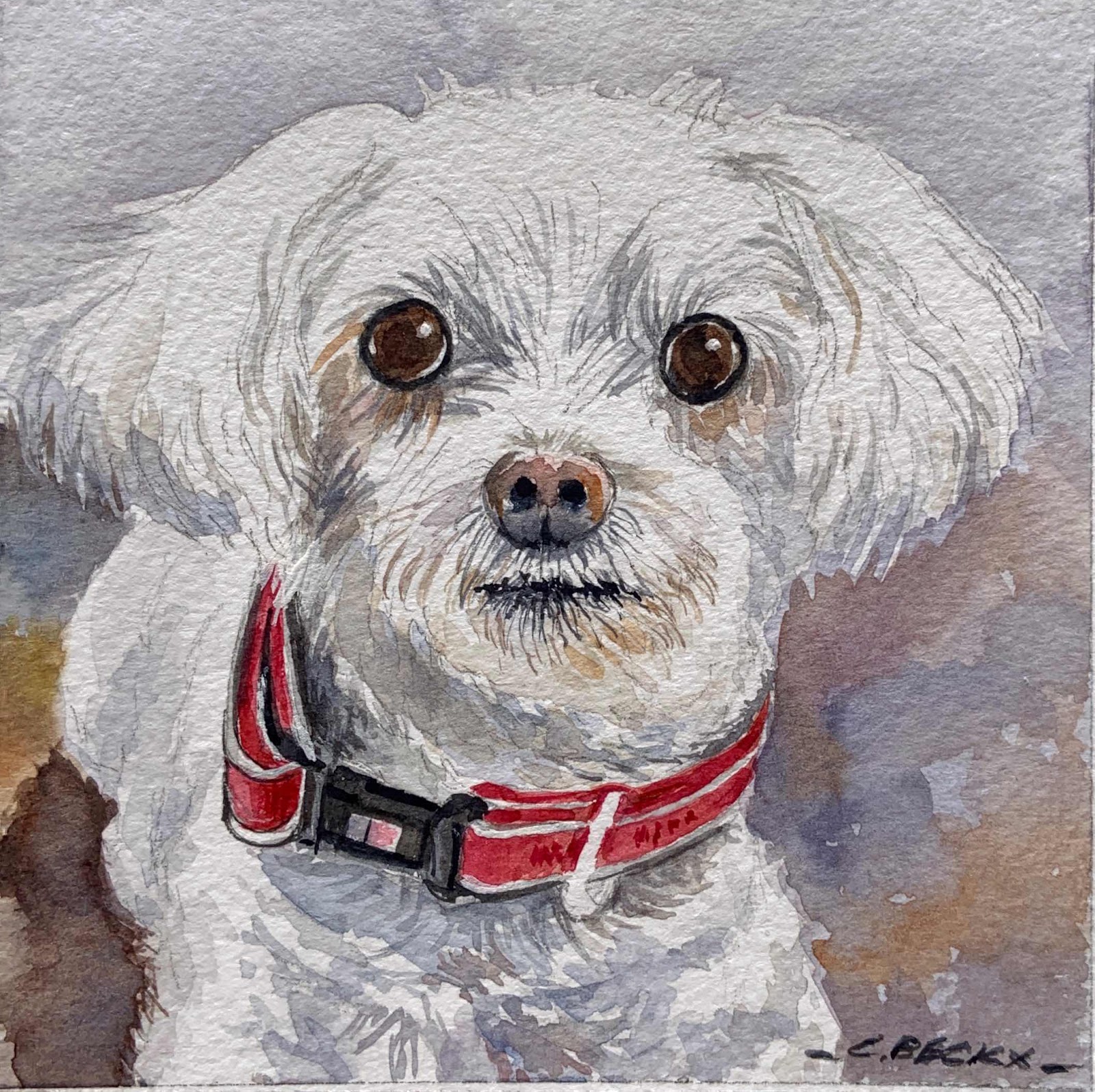 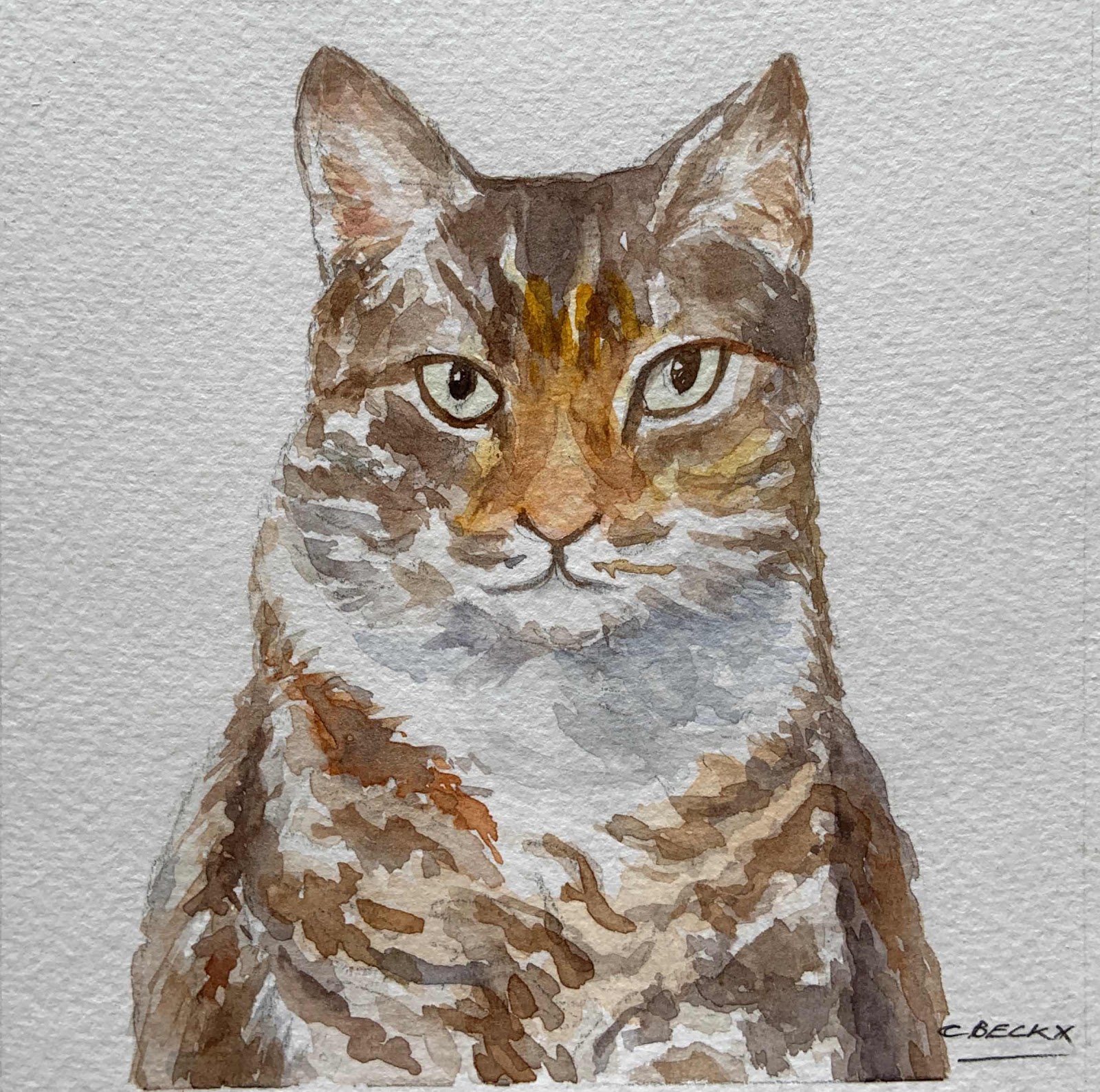 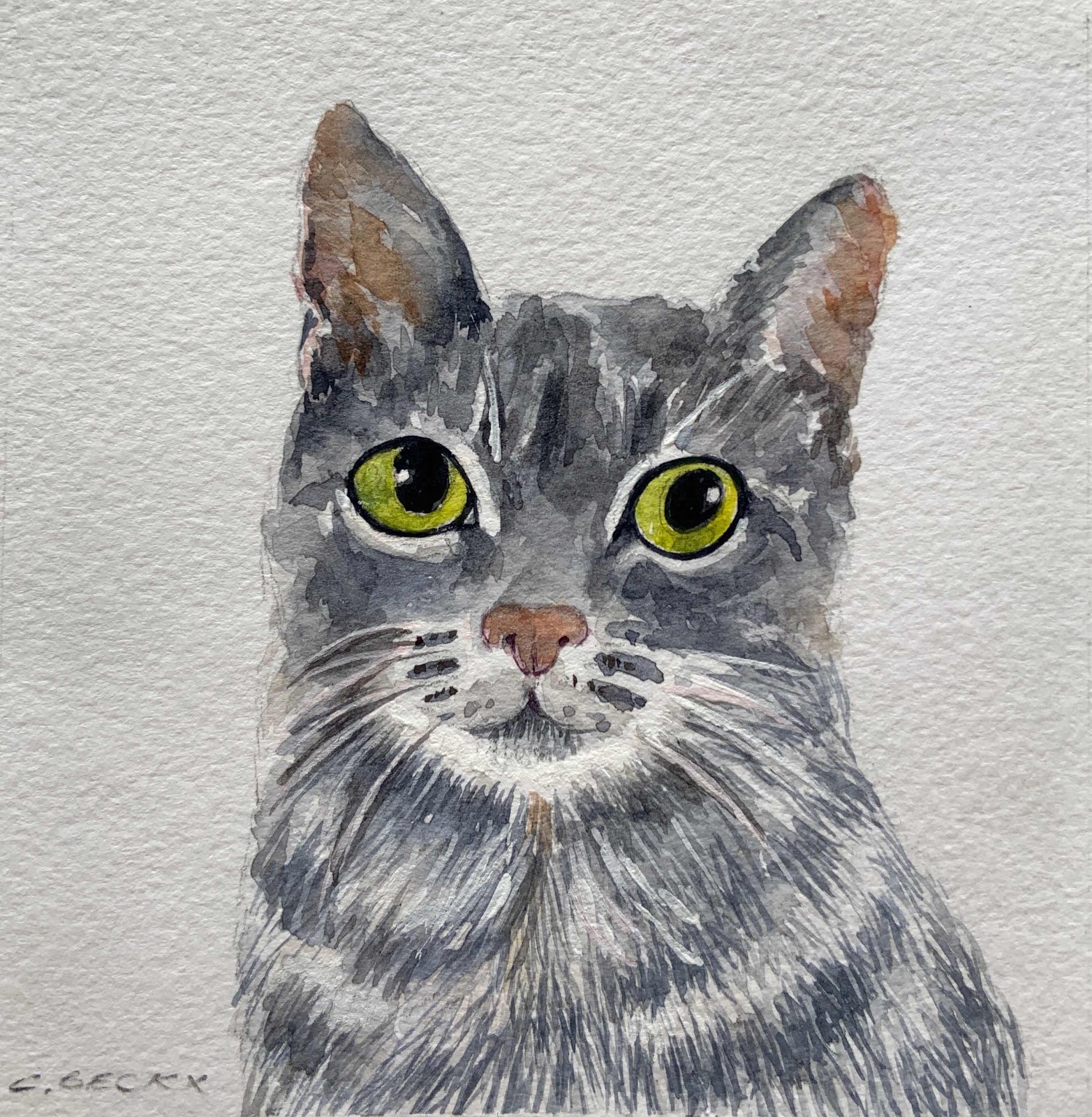 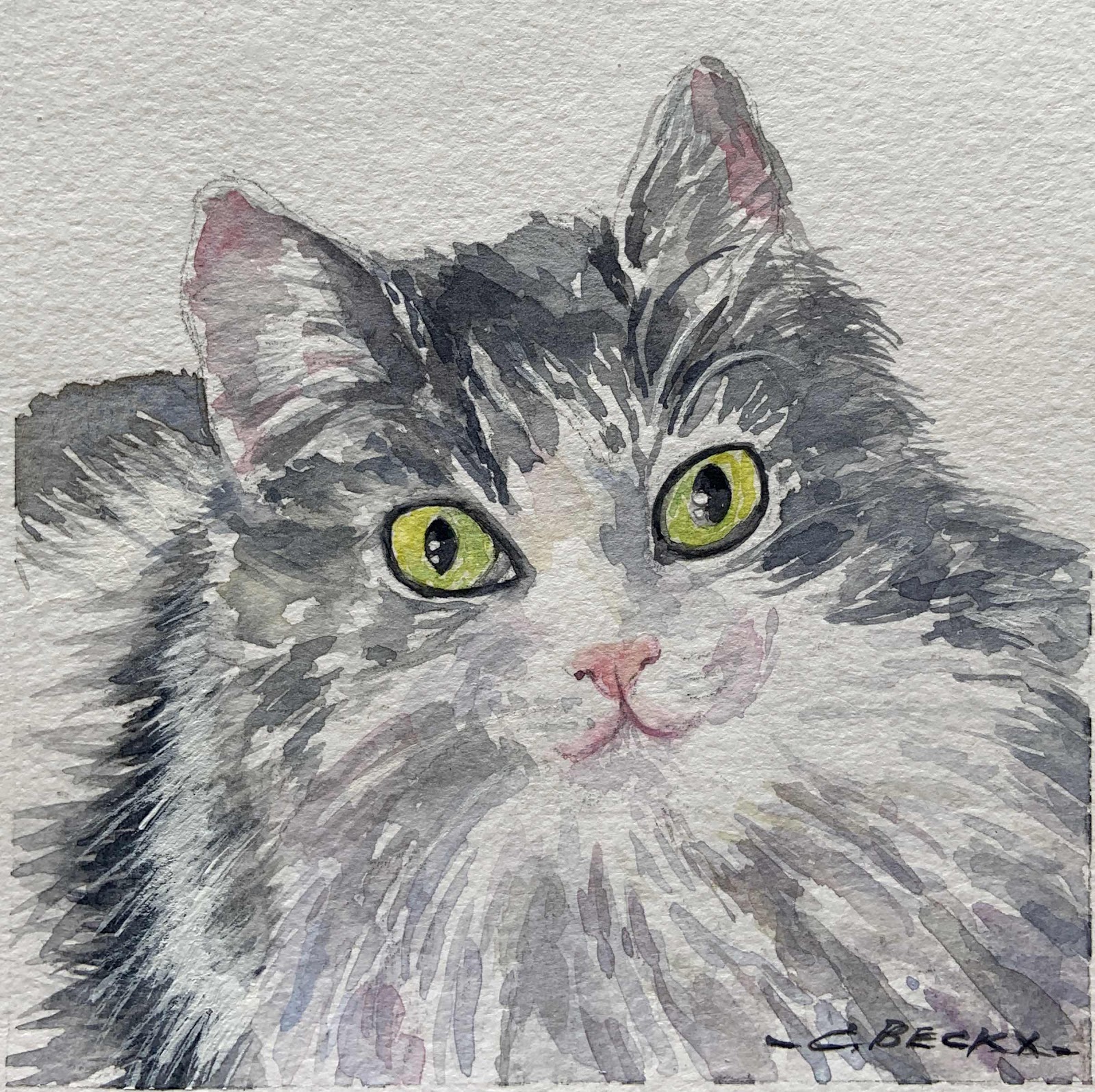 Willow - watercolour on 300gsm Cold Press watercolour paper - 5” x 5”
If you would like to commission a portrait of your favourite pet I would be happy to help. Please contact me by leaving a comment or by email at
info@carolleebeckx.com
Posted by Art Matters at 09:54 No comments:

Where does one begin to take stock of the year that’s drawn it’s last virus-filled gasp?

2020 in Australia started with horrendous bush fires that devastated large parts of the country. Whole towns were obliterated, many people died, and the toll on wild animals, unable to escape the flames, was awful. The road to recovery here is ongoing.

Then we started hearing reports of an outbreak of a corona virus in Wuhan, China, with confirmed cases rising and then reports of deaths. By the end of January the first cases in Australia were reported and by mid-March restrictions were imposed to slow the spread of the virus, now officially called COVID-19. Australia has fared better than many other places, but now suddenly, alarming numbers of new cases have challenged our growing complacency. Movement between states has been halted and put many plans on hold.

The art classes moved out of my little studio. We went online using Zoom. It was surprisingly successful, and although enrolment numbers were small, all who participated enjoyed the time to learn and create together. It became a safe way to remain connected.

This year my motivation to paint became much harder to find when the usual group exhibitions like the Rotary Spectacular were cancelled. I’d lost the urge to paint in oils, so I started to draw and paint more on paper, working in watercolour and experimenting with acrylic inks. I know that, in time, oils will call me back, but for now I am content to allow myself the freedom to experiment and play a little.

From the beginning of the year I had been using a square Seawhite sketchbook for sketching when out and about. 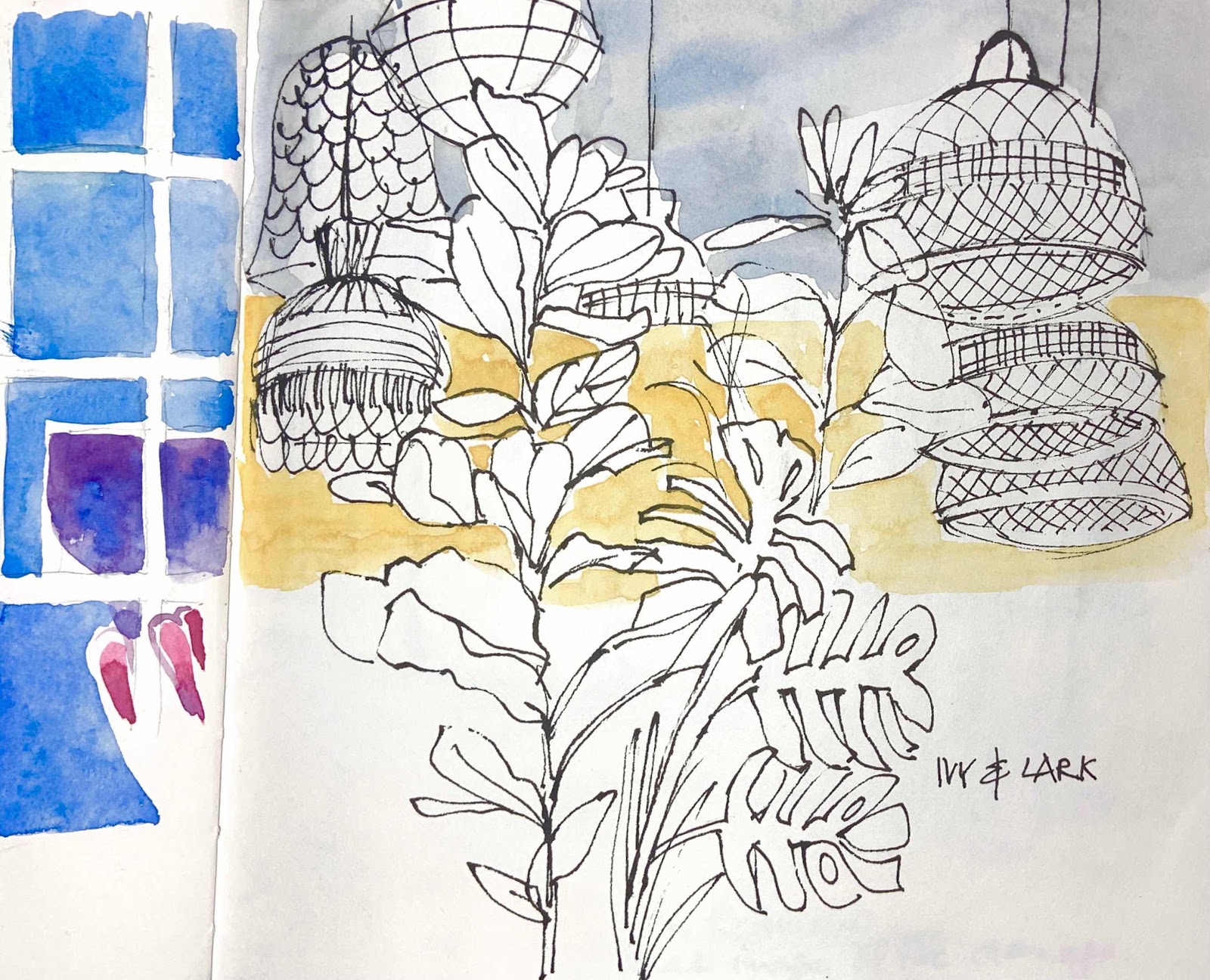 Sketching at Ivy and Lark - ink and watercolour

Since I was now largely confined to my home, I used the sketchbook to plan paintings, working with digital revisions and making notes on planned changes. With the closure of the physical Studio I also felt the need to document the changes in my life as well. 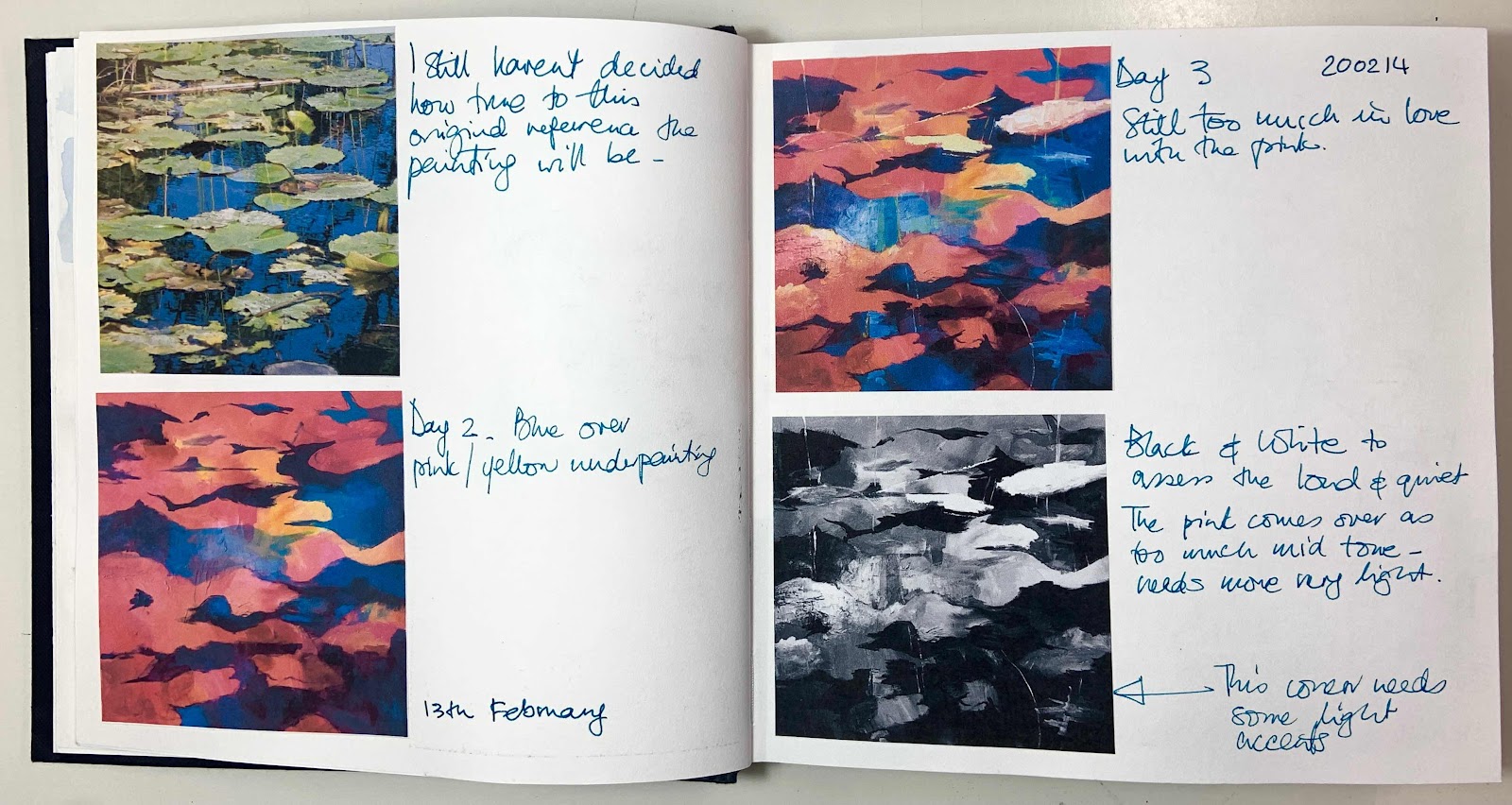 In March I started making notes trying to record what was developing around me. The notes make for depressing reading, especially since months later the news is, if anything, worse not better. 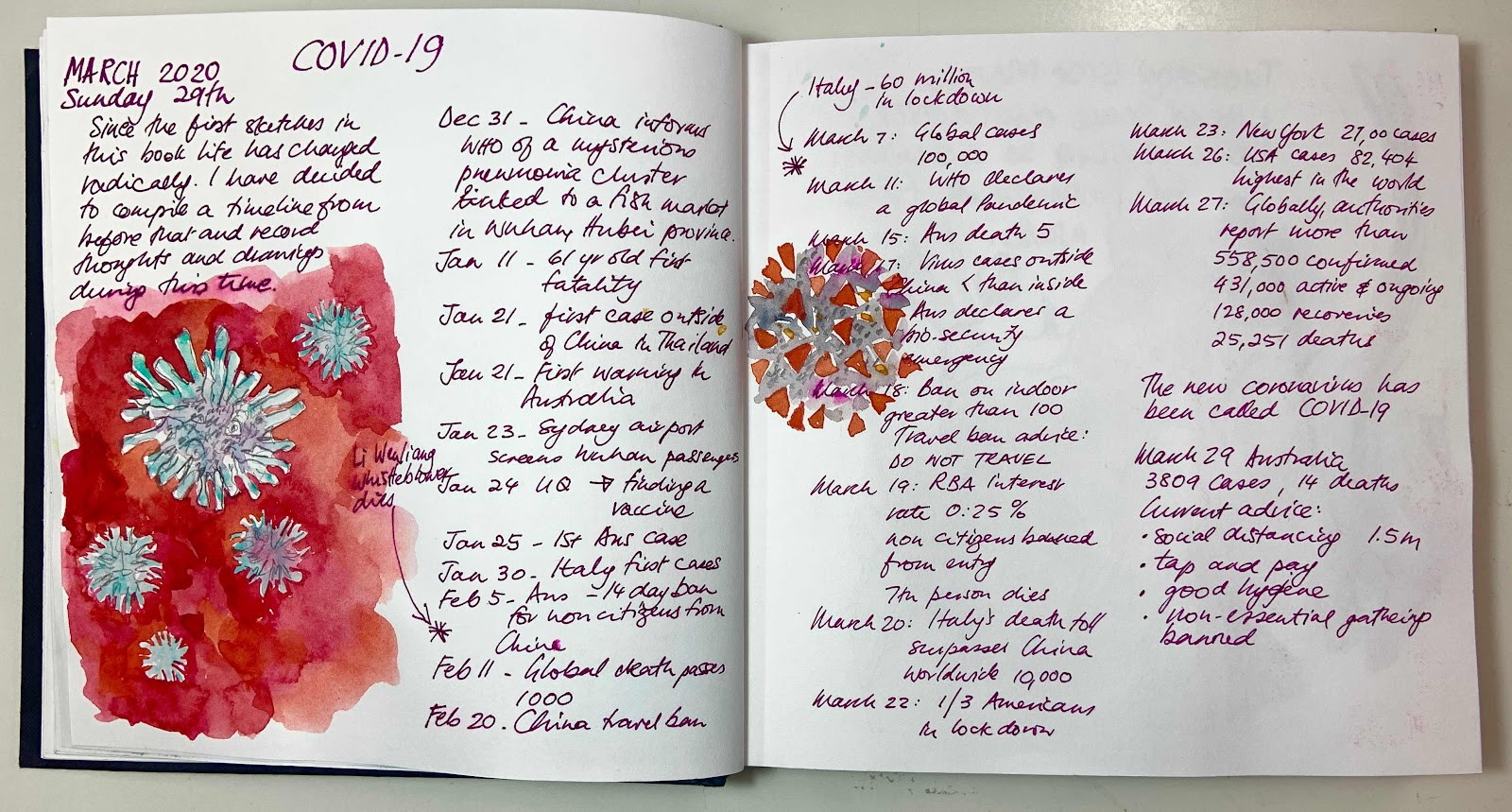 Then the Covid-19 notes were supplanted by other sketches until the tragic, brutal death of George Floyd occurred. This was another terrible milestone in this unique year. In some ways it helped me to honour his life with a drawing. 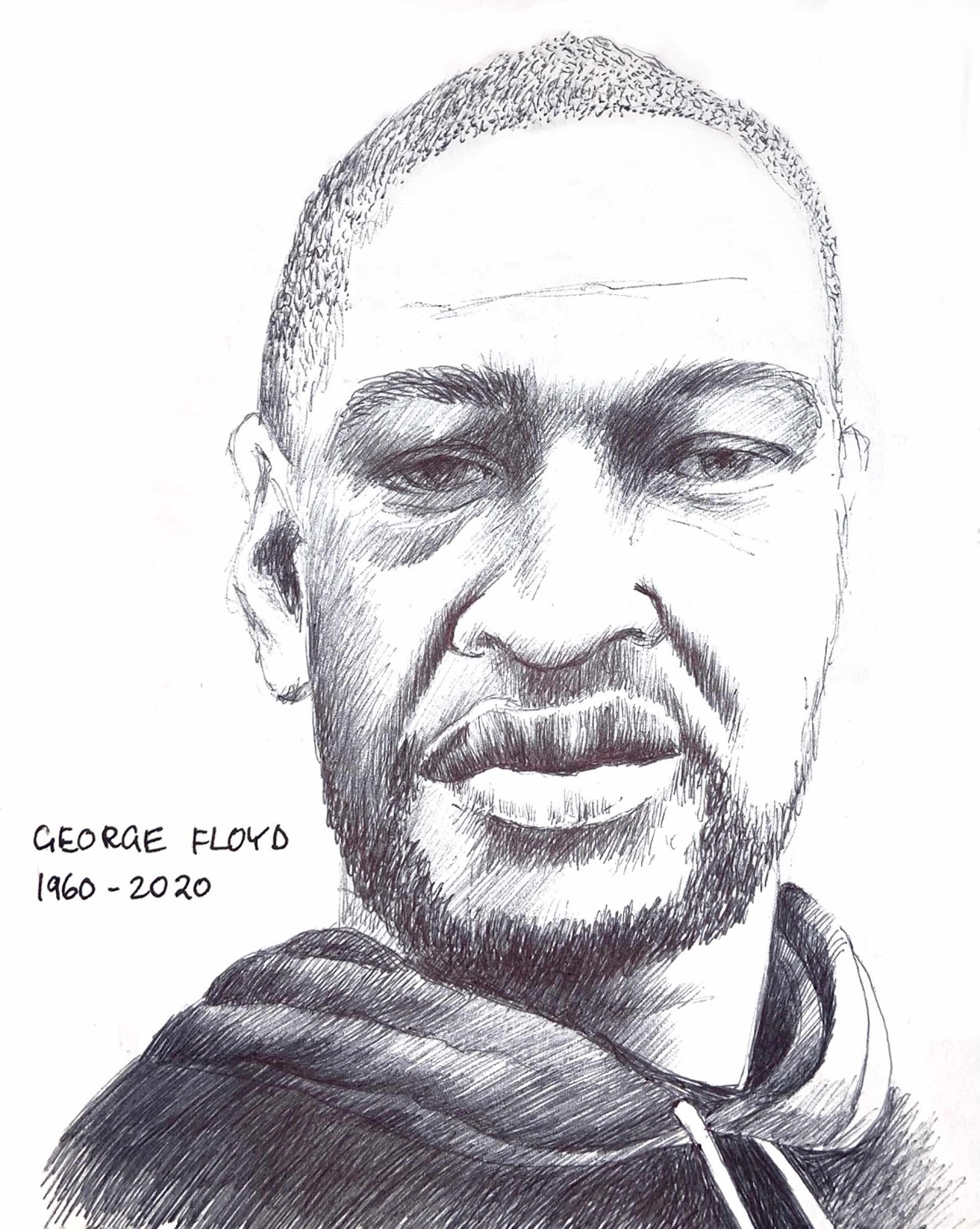 After the death of Ruth Bader Ginsberg in September I felt the need to do another portrait. 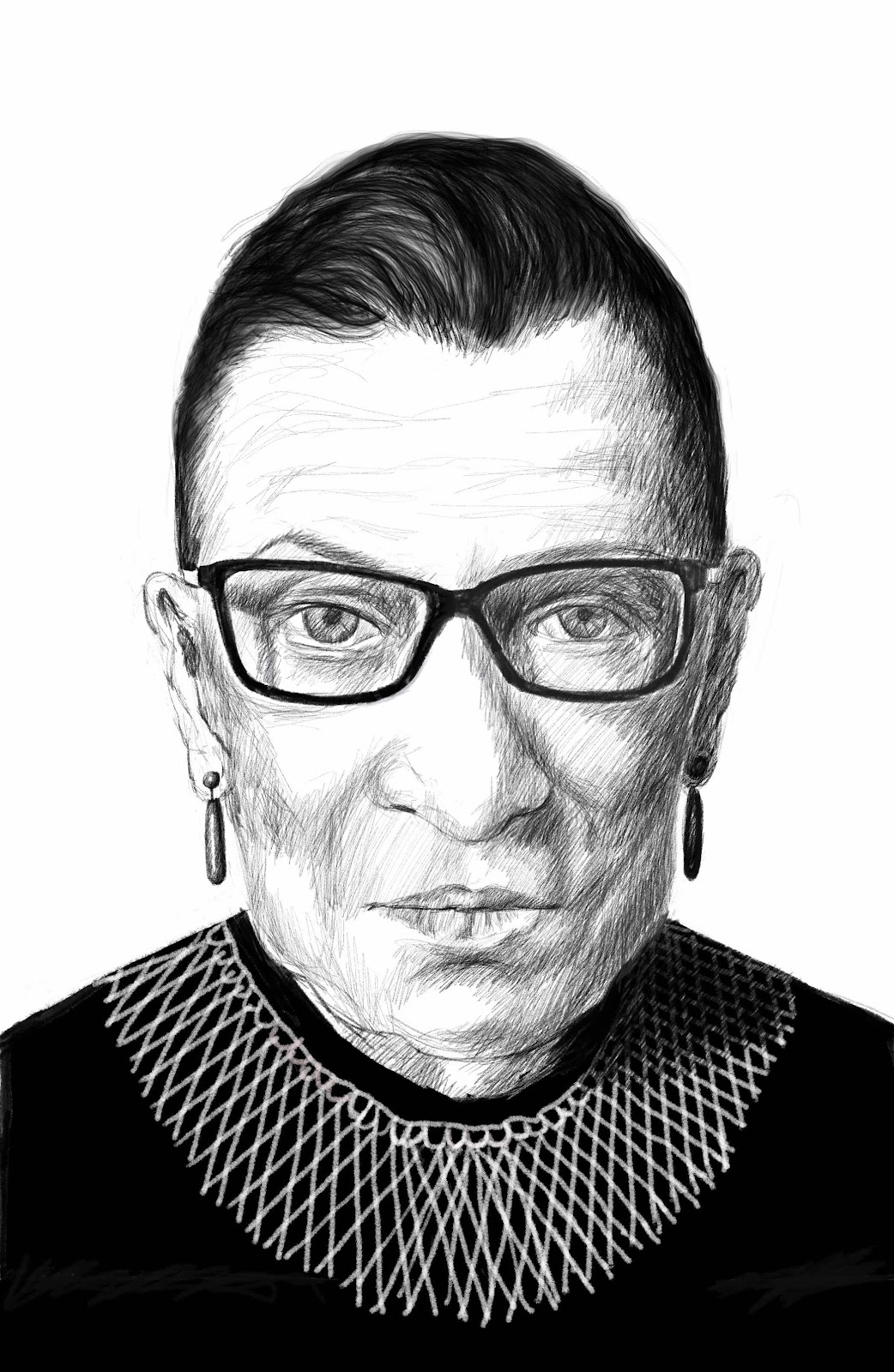 This year I’ve been grateful to have the park across the road from my home, enabling me to walk, to blow away the cobwebs of being cooped up at home. This abstract drawing is inspired by bark. 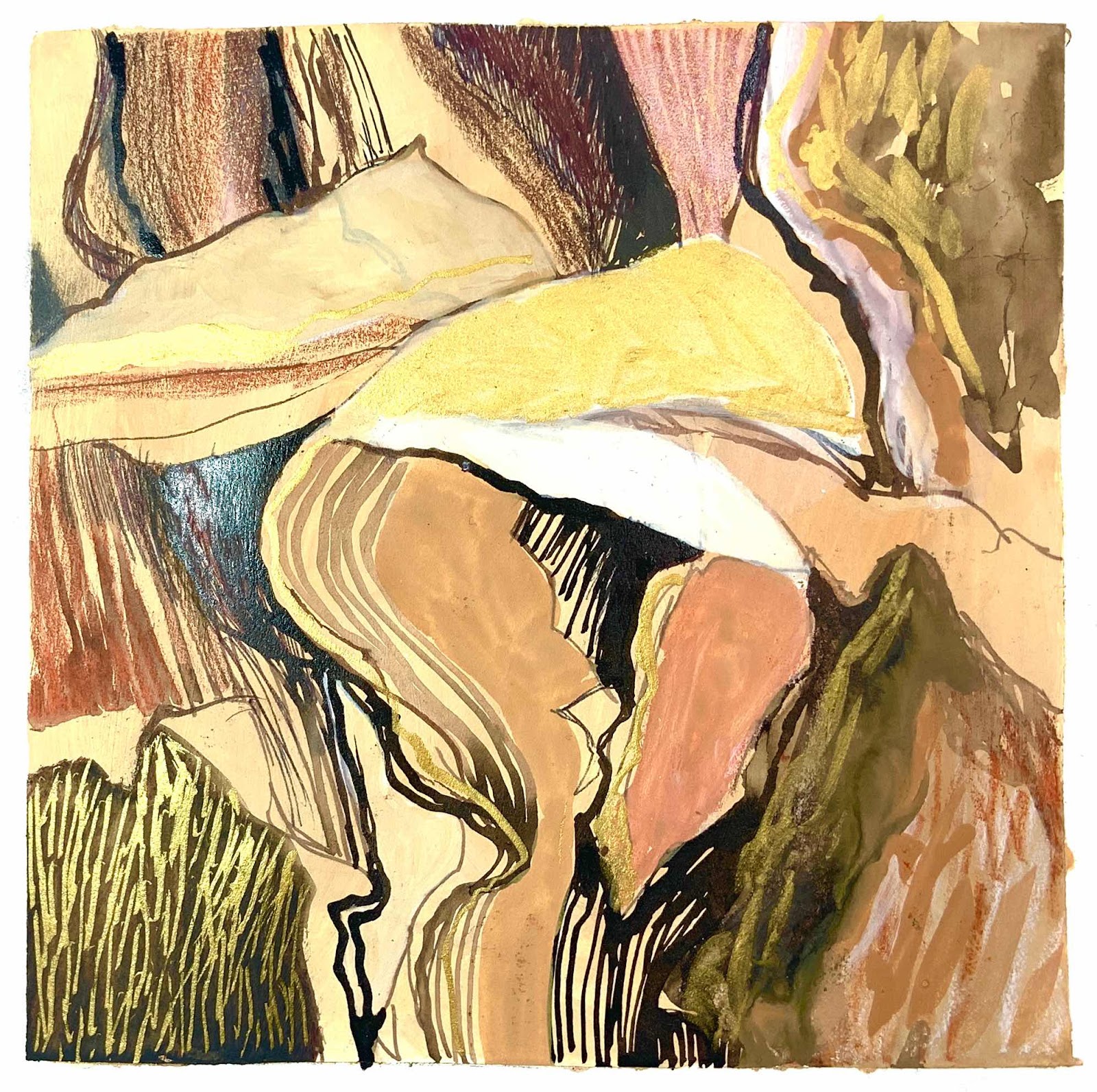 Digital work using Procreate has been a lifeline this year. I’ve concentrated on portraits, using muses from Sktchy, completing 88 portraits with just a handful in analogue mediums. (I’ll write more on the these portraits in a separate blog post to follow.)

A commission for my son involved the design of a wallpaper for his living room - you can read more about this here: 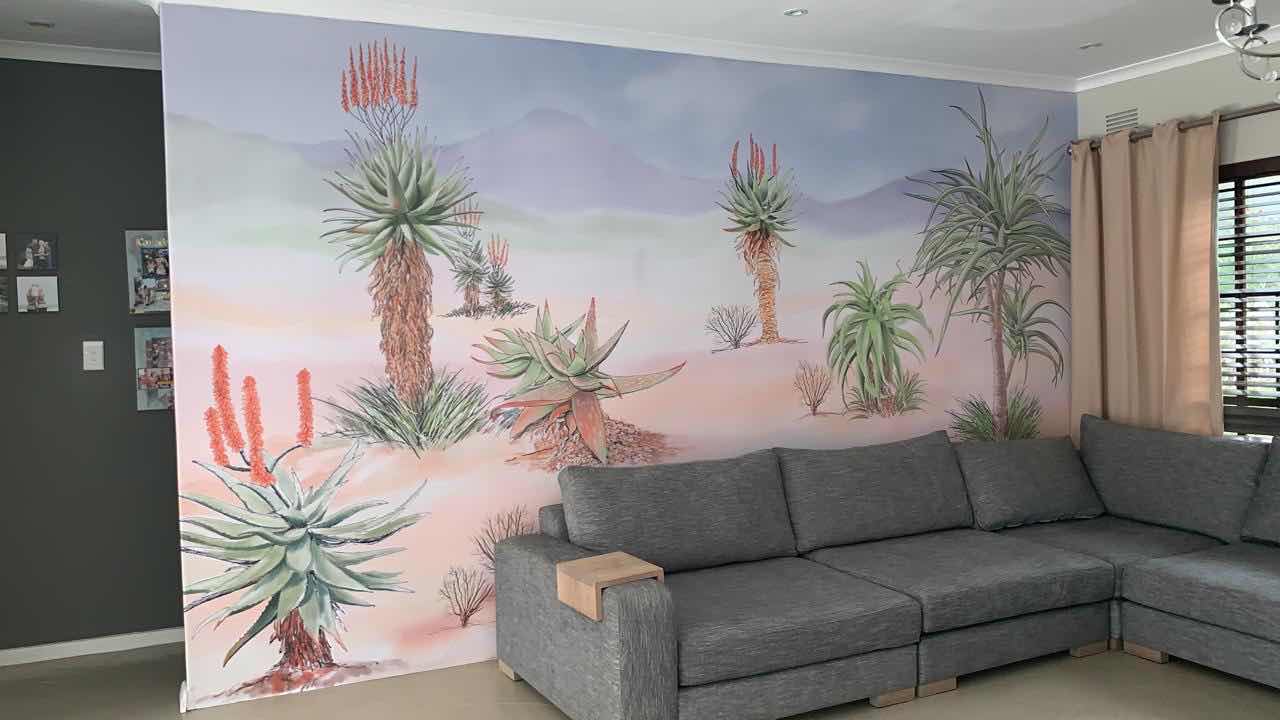 What lies ahead in 2021? The only thing I know for sure is that we will have to accustom ourselves to a new normal - a COVID-19 normal. The virus will be with us for some time (if indeed it will ever go away completely) in spite of vaccines now becoming available.

I live in hope that I will be able to reopen my Studio to real live artists. Should conditions in Queensland remain as they are with no community infections this could be at the beginning of the first term.