A Year in Australia

A year ago today I stepped off the plane in Brisbane - the beginning of a new adventure in a new country.
Looking back over the last twelve months, the time seems to have passed in a blur. There have been some low times. Adjusting to life in a strange place takes time. It’s hard to leave loved ones behind and start in a place where one has no history. And I get very nostalgic about many things including the glorious aloes. 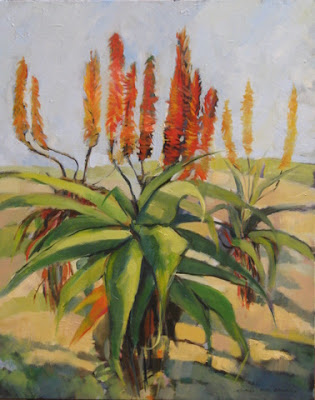 Aloes – oil on canvas 900mm x 600mm Carol Lee Beckx © 2010
No sooner had I arrived than it started to rain. And rain and rain and rain some more. The January floods hit Queensland and Brisbane hard.The photos remain horrifying. Plans that I had made to visit places, meet people and integrate myself into Australian life had to be put on hold as my new city was swallowed by mud.
Then, not a month later, on the third of February, Cyclone Yasi hit northern Queensland with a vengeance. Brisbane was not directly affected, being some 1500 kilometres south. However, coupled with the damage caused by the floods; the cyclone had widespread effects on both the people and the economy. For one thing the price of bananas sky-rocketed to $15 per kilo!


But, life goes on. Queenslanders washed off the mud and carried on. I started to find my way around. My surroundings became familiar and, more importantly, I made new friends. I’ve shown paintings on local exhibitions with some success – I won First prize for Still Life and the Redhill Gallery Prize at The Gap Community Art Show. In addition, I received Highly Commended for a painting at the Woodford Biennial.
A high point in my year was when I moved into my own home at the beginning of June. I could set up my studio and was able to start teaching. I started to feel settled. Another milestone was when I built my garden with the help of my son-in-law. A barren patch of dirt became a little sanctuary. I could literally put down roots. Instead of visiting vervet monkeys I have to fight off the attentions of the bush turkeys who a very partial to my parsley. 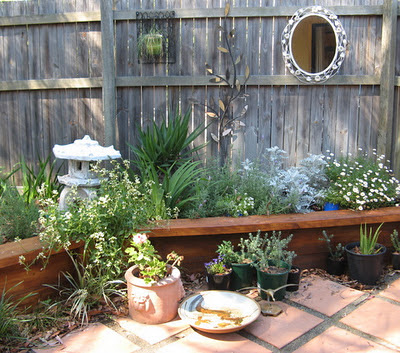 While part of me remains with family and friends in South Africa and I miss them sorely, technology allows me to remain in close contact with them. I can still be involved.
Even though there have been times when I questioned my sanity for embarking on this crazy venture, I am glad I made the move. I enjoy spending time with my daughter and son-in-law and developing a close relationship with my grandchildren.
My plan to focus on painting and teaching art is becoming a reality. I am working on a new commission for three paintings. The art classes are going well. It’s a good feeling to see my students blossom, growing in confidence and ability after a few short months.
Posted by Art Matters at 08:20