I started writing Art Matters towards the end of August, 2010 when my move to Australia was becoming a reality. (I had applied for a visa back in February 2008) It follows that around this time of the year I become nostalgic. I thought I would revisit some of the posts that I enjoyed writing as well as those you enjoyed reading too.

When I began the blog I knew nothing and had to learn everything along the way, including how to add photographs.

My second post  on Art Matters 'Deciding to Move'   sets the scene...I've added a favourite painting from that year. It's the view from my daughter's farm across the Barbeton Valley to the Kaapse Hoop mountains. 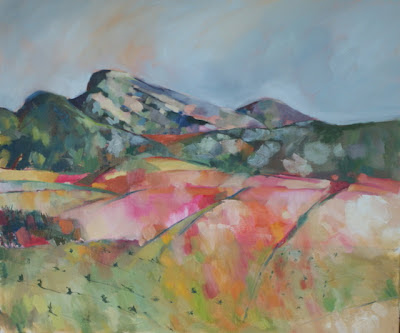 In May 2008, I made the decision to relocate to Brisbane, Australia. Now, over two years later, the move is becoming a reality. It's strange to be in neither one place nor another and it's almost as though one's life is in limbo.

Although I studied art at high school and later trained as an art teacher, most of my life has been spent following other career options - more out of circumstance than a specific plan. I have been amongst other things: a landscape gardener; a mosaic artist; a book illustrator; and at one time junior and high school
teacher teaching a variety of subjects - English, Maths, and History.
For the last 12 years I have been the owner of a retail shop that has no connection with the "art world"
at all.

I taught art formally for relatively short periods, but have lectured and demonstrated for numerous
art groups. Although  making art has had to be done alongside other occupations, and has often taken
a back seat, I've learnt to be very productive in short bursts when a gap appeared in my day.

I plan to change this and now, eventually, do what I love - paint, draw and teach art.