If it's July, then it's time for a treasure hunt - Seth Apter's Buried Treasure. Here you will find the links to all the blogs featured in this year's hunt. This is a veritable Aladdin’s Cave of Blog treasures. Artists are invited to search for favourite posts on their blogs to share with others. The first year I took part, Buried Treasure led me to an artist and friend here in Brisbane.
In the true spirit of nostalgia I am re-posting A Trip down Memory Lane. This was written during preparations to pack up and leave South Africa and move to Australia.
Then I thought I would add a couple of links to other posts you might enjoy:
Different Times, different media
and your all-time favourite post - More drawing: Vernon Ah Kee  - these drawings never cease to fascinate me.
And I have re-discovered inspiration for some new drawings - watch this space...


A Trip down memory lane.

The process of moving involves so much more that clearing cupboards and sorting cups and saucers. It is a time for reflection. Frequently one is brought face to face with people and events from the past. Another box  brings all manner of memories to the surface.
You discover that you have a box belonging to your Mother filled with her treasures – the lace handkerchief from her wedding day, a birthday card you had made, a photograph of yourself in a mermaid costume. The costume was a work of art – made of sea-green satin with a carefully stitched tail and cellophane scales. Photographs of our home when I was a child were also tucked away in a small album. You realize that these were kept with love. 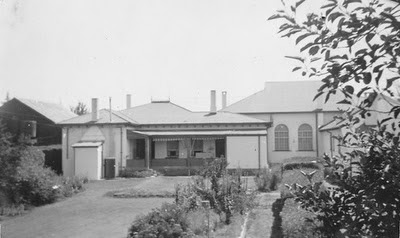 You come across a photograph of a bride bending to greet a little boy – it’s your mother and perhaps an older cousin – it’s an evocative image and you realize with surprise that you had forgotten how beautiful she was. 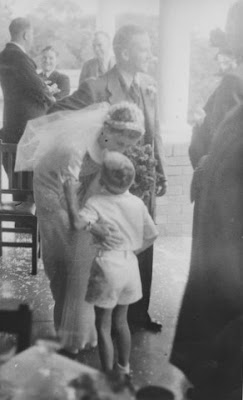 It’s impossible to simply throw these away, but it can’t all go with me. Modern technology comes to the rescue, allowing me to scan the images and take them with me in digital format. Now I think of ways the images could find their way into future drawings.
Then, in the last packet of documents and photographs, I find a leather document case belonging to my father. Inside are letters of reference written to my paternal grandfather from companies for whom he had worked – in the most beautiful copperplate handwriting – and one of the few photographs of him, striding down the road in Bournemouth – a stern figure, much as I remember him. 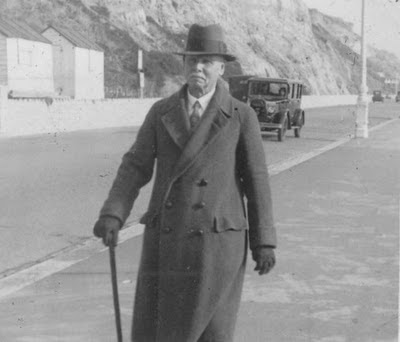 A few days ago, a friend who lives out of town phoned me to say she had found letter from me. She had been trying to clear out a drawer. It was jammed and when the drawer eventually opened there was the letter.

It was something we rarely see  today, a proper letter - on paper - written with a fountain pen, thanking her for her support and friendship after I had spent some time on her farm. I hadn’t dated the letter but I knew exactly when it had been written as I had some entries in an old art journal describing the time on the farm. The journal had drawings that echo current ideas, similar themes and ideas, and the ongoing struggle to be creative.

Then I found something quite different. A slip of paper was among the usual debris that gathers in a bedside table drawer. It was a diary page from 2003; scrawled on it was the title and author of a book that I’d been trying to remember for years. It’s the most amazing story of Christina Dodwell’s journey across China, A Traveller in China .
Now I will be able to read the book again, knowing what to look for. You discover that the important things find you when you stop looking.

Here is one more in my continuing theme of portraits. This time it’s a recent commission for a local family. I painted the little boy a couple of years ago and now it was time for the whole family to have a group portrait.

The backdrop is a view from the top of Table Mountain which has significance for both the family and for me since we both have ties to South Africa. It seemed fitting to recreate a holiday photograph taken on the mountain in their family portrait. 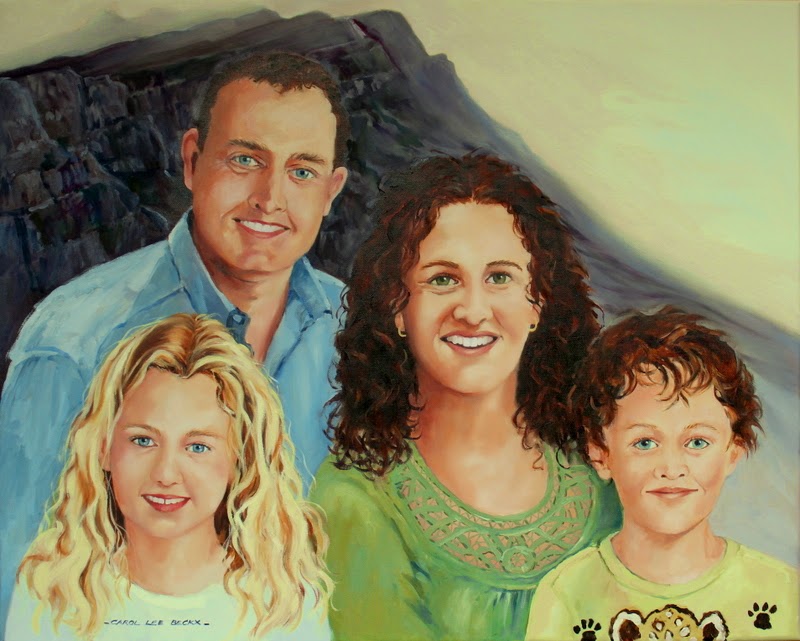 I did a photo shoot with the family and then worked with a number of different photographs for each family member’s face.

I am so happy to be able to photo shop with paint rather than computer software. I would rather wield a brush any day.
Posted by Art Matters at 16:26 No comments:

This painting was inspired by an early morning walk on a friend’s farm. The early sun shone through the trees lighting the path. I used sketches and photographs, but ultimately relied more on memory to capture the mood of that early morning. 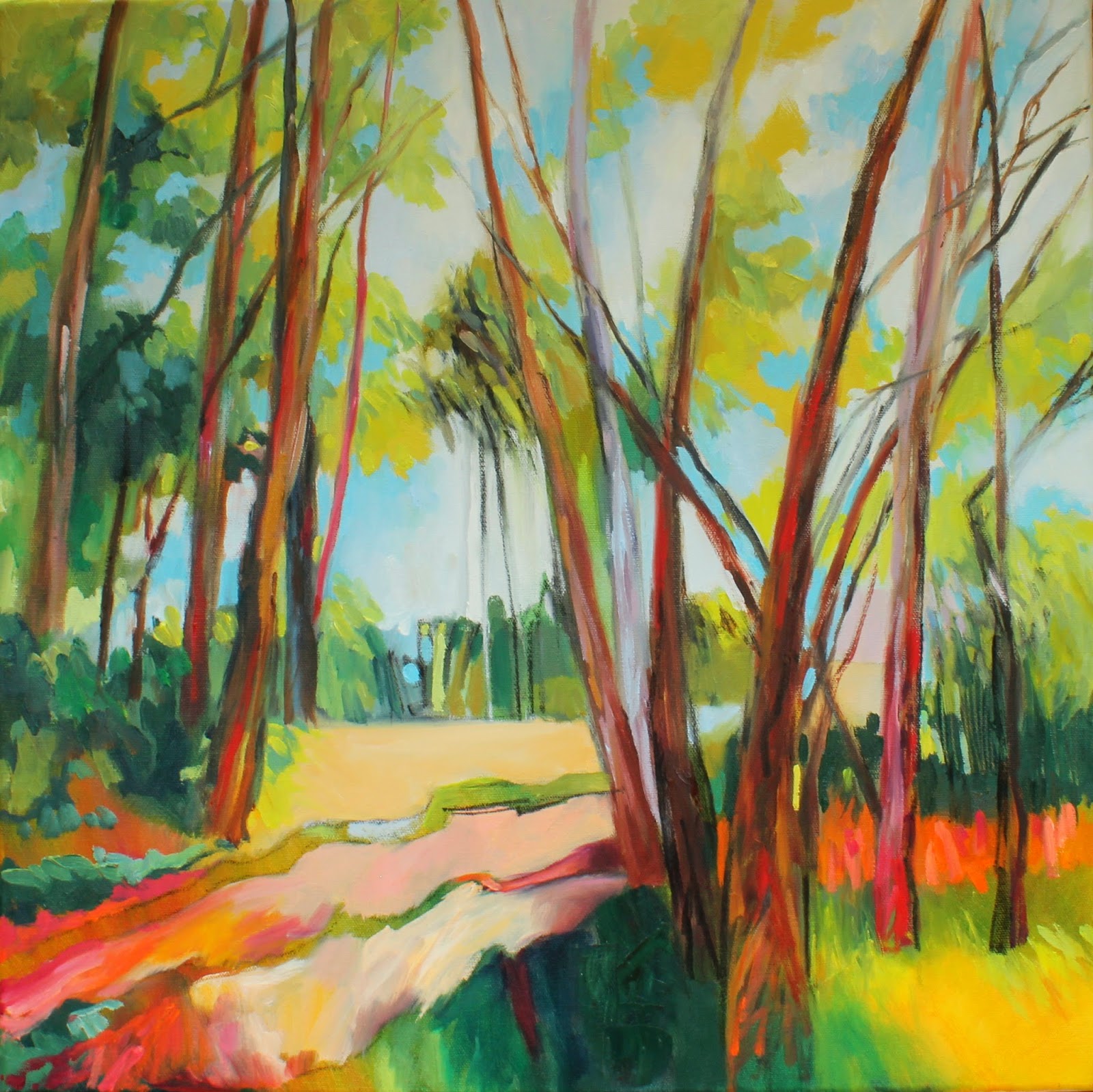 This is a prestigious exhibition of small works, held annually at the Lethbridge Gallery, Latrobe Terrace, Paddington. If you click on this link you can see all the Finalists.

The Opening will be on Saturday evening from 6pm. If you are in Brisbane come along for a fun evening or if you’d like your viewing more laid back visit the Gallery later during the following two weeks.

Please note: Blogger is being difficult - changing font size on a whim - hopefully things will revert to normal soon.
Posted by Art Matters at 13:51 No comments:

Portraits, portraits and yet more portraits

I've been on a portrait binge. Painting them that is.

This all started during the last week of Sketchbook Skool when students started doing portraits of the Fakulty members, and Tommy Kane in particular. Tommy became so enamoured of our efforts he asked us to send the portraits to him - he had an idea for a new book. The trickle of "Tommy" faces became a flood. The link above is to Tommy's marvellous book - but more about that in another post.

Here is my first - a portrait using the humble Bic ballpoint pen with a wash of watercolour. I took at screenshot of one of Tommy's videos. He's standing outside Muscle Park. 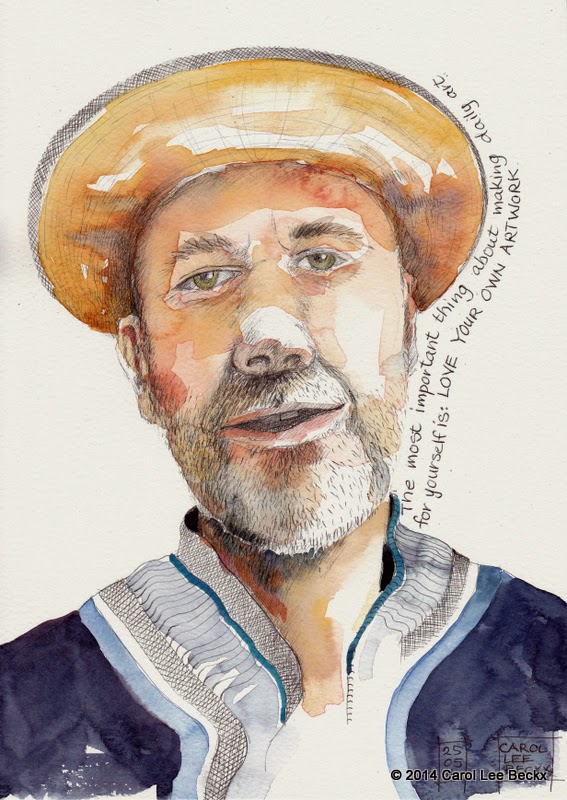 
Then I decided to do another one, this time I used Tommy's Facebook profile photo. This one is also done using the black Bic. 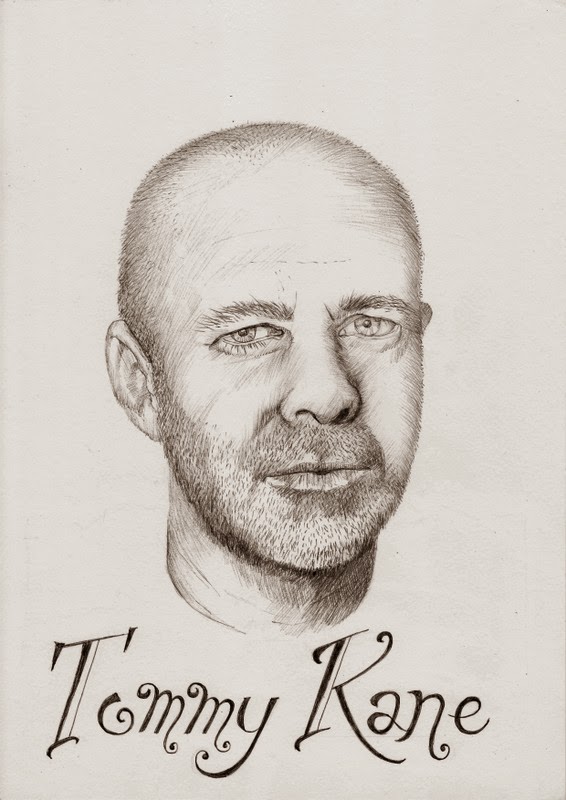 These first two drawings  were done slowly, building up the values gradually. Over the past weeks I've been working on a portrait commission - a family of four: Mum, Dad and the two children.
It's been slower than I would like but the light at the end of the tunnel is shining brighter and I'm almost done.  I wanted to paint a portrait in a faster more spontaneous way. I decided to use a limited palette of Schmincke gouache which was a recent purchase.

So who would be my subject?

While watching another video, this time Danny Gregory talking about Sketchbook Skool - I took another screen shot - Danny's expressive features made him the ideal portrait subject. I painted this in a Fabriano Venezia sketchbook. 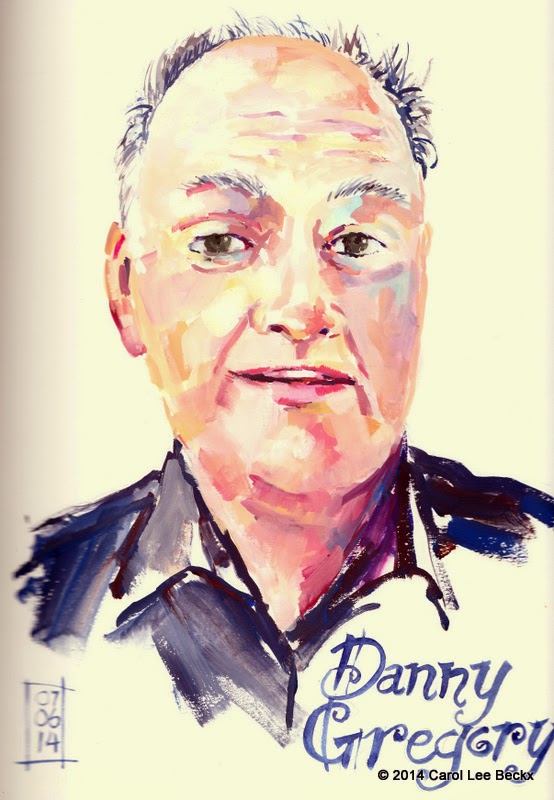 Happy with the result I wondered - who should be next?

Aha Jean-Christophe Defline!
He's a fellow klassmate and very talented artist - check out his work in his blog here... It's a good thing he loves pink! 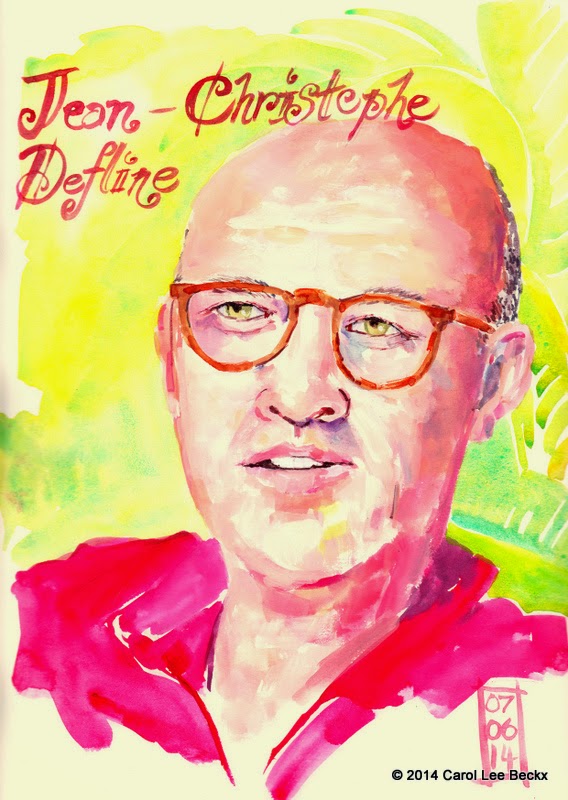 Now on a roll, I found a photo of the beautiful and talented Elsbeth McLeod,also a klassmate. Please have a look at her excellent portrait of Tommy on her blog here. 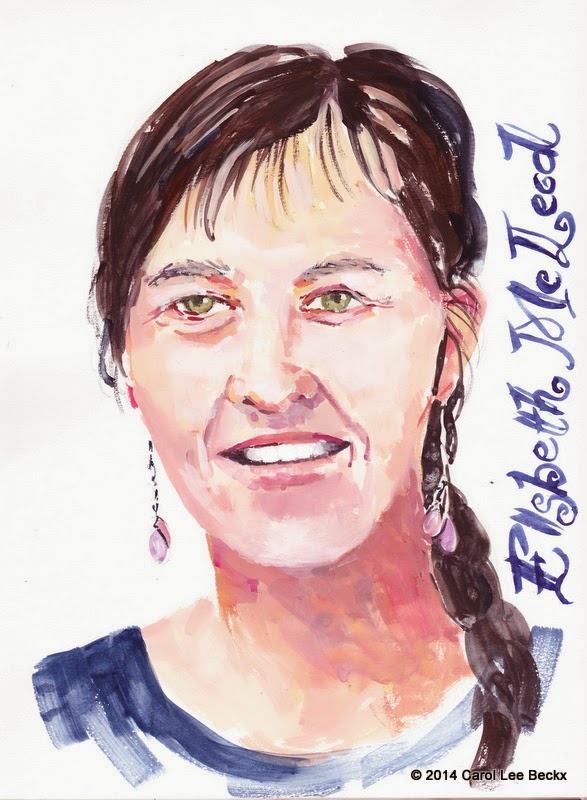 These portraits were done relatively quicky. I didn't make note of the time but I would say they each took a couple of hours at the most. The difference with these portraits is that there were no big expectations. I didn't have anything to prove, I could just have fun trying to capture the essence of these wonderful people.

Tomorrow it's back to complete my family portrait.