Dragon Vase with Kintsugi and Magnolias

This painting, Dragon Vase with Kintsugi and Magnolias, has a special place in my heart. Many years ago, I found the vase in a back alley in Hong Kong. I think it's a really old one. 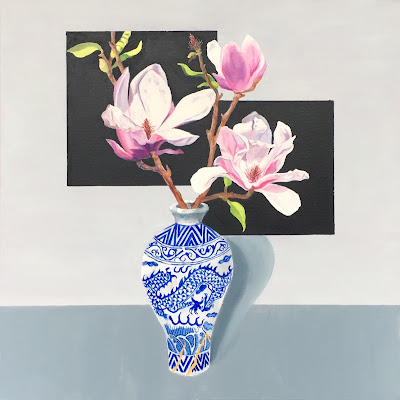 I have painted it a number of times in various mediums. A few months ago, disaster struck. While moving a canvas out of the studio I knocked the vase off the cabinet. It fell on the floor and some large pieces were broken off the foot of the vase. I was devastated and carefully packed the vase and pieces away.

For a long time I couldn't bring myself to try to repair it. Then I remembered the Japanese art of Kintsugi - the repair becomes an embellishment and acknowledges and honours the object.

Eventually I did repair the vase but my attempt at Kintsugi was extremely feeble. When the pieces were glued together there was no trace of any gold. Then I realised that I could create a painting which would honour my Dragon vase in a different way.

Recently I have been preoccupied with flowers and magnolias in particular. A still life including these blooms which are associated with nobility, perseverance and dignity it seemed fitting to include these with the vase. In my painting the vase has been repaired with gold. I love being able to paint!

I'm pleased to say that Dragon Vase with Kintsugi and Magnolias has been selected as a finalist for the Lethbridge 10,000. I'm so proud and humbled that for the fourth year in a row I have had a painting selected.