Open House Brisbane is an annual event allowing the public a glimpse of Brisbane's historic and architectural treasures.

On Saturday afternoon I spent a most enjoyable hour visiting one of Brisbane's oldest houses - Toonarbin. The house was built around the mid 1860s by Benjamin Backhouse and sold to Captain Henry O'Reilly. Yes it's the same O'Reilly of the Bonded Stores in Margaret Street that were recently felled by the demolisher's wrecking ball.

Those of us who won a place on the tour, were able to see inside. The owners generously led us on a tour of the whole house, telling the story of its original owners and the subsequent changes over the years.

Three generations of the O'Reilly family lived in the house, buying up the surrounding land down to the river and on either side until the property measured 24 acres. Subsequently, land was sold off and in 1926 the property was sold to the Catholic Church.
Many alterations changed the house considerably, in fact the original house was hidden by the extensive verandas and the red brick cladding present today.  Countless partitions divided the interior to accommodate the Sisters of Mercy Convent to the extent that at one time there were 17 bedrooms - granted most were very small!

The best part of this story is that of the current owners.They have lovingly and painstakingly restored this historic building. They took down the partitions; stripped paint off cedar window frames; re-created ceiling roses and cornices. Craftsmen skilled in these almost forgotten trades have been employed to restore every room. Every care has been made to honour the heritage of this lovely house. 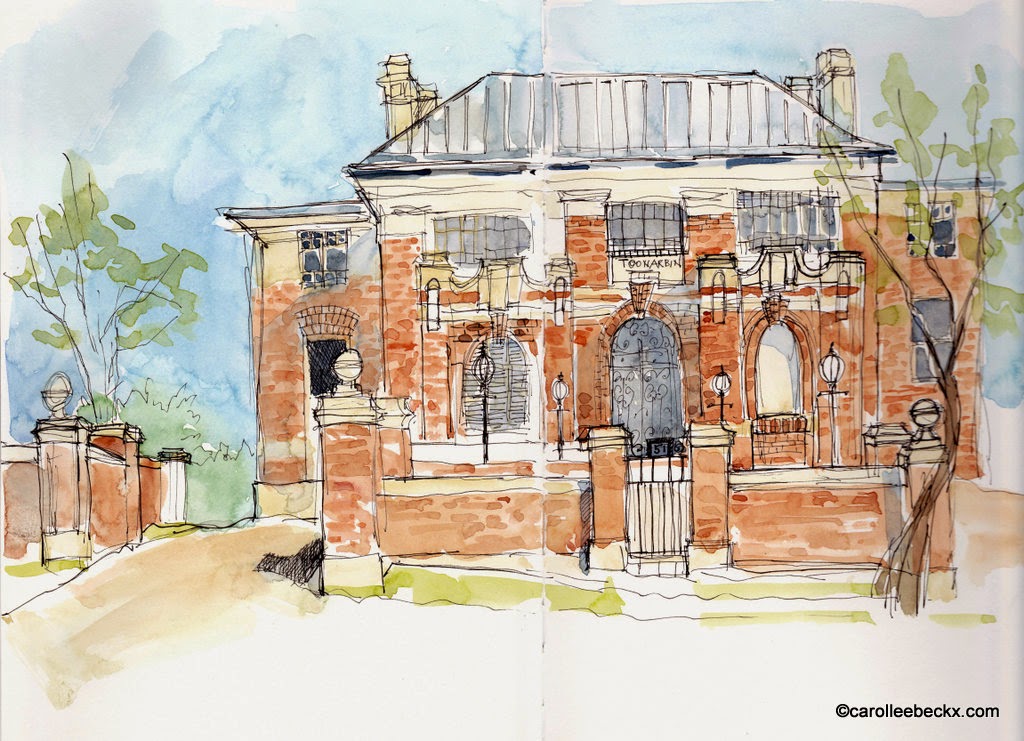 I arrived about 40 minutes before the scheduled tour time and found a very convenient bus stop bench directly opposite Toonarbin. This position was ideally situated for me to do a sketch while waiting. Once the tour was over and we reluctantly made way for the next group, I crossed the road and added watercolour to my earlier sketch from the comfort of the bus stop bench.