It is with sadness that I read of the death of Gwyn Hanssen Piggott in London on 6th July 2013 . She was an outstanding Australian artist. Steve Dow said in a recent article that had she been a man she would have been accorded the same stature in Australian art as Fred Williams.

On a visit to Brisbane in 2008, I visited the Queensland Art Museum and I was struck by the stillness of the ceramics displayed on a long shelf along one wall of the Gallery. The pieces - all glazed in similar colours - were displayed in groups.

The stillness and simplicity of the vessels echoed the paintings of Morandi. I took numerous photographs and intended at some to do a series of paintings inspired by ceramics.


When I was researching some ideas for Drawn from Clay, an exhibition held in conjunction with the Ceramic Association of South Africa, I found an article Gwyn Hanssen Pigott. She was artist in residence for a time at the School of Mines & Industries, Ballarat. Ltd.

I was fascinated to discover she was the same artist I had admired in Brisbane. The images shown in the article were of groupings of cups and bottles before bisque firing, so the pieces were matt – no shiny glazes – just such beautiful shapes – they had a quiet serene presence.

I found her working methods so interesting to a “non-potter”. She would throw a series of bottles and cups and when lifting them from the wheel gently squeeze the forms, adding subtle changes and complexity.  Some were dipped after being thrown and squeezed into different shapes. The pieces in themselves were so simple – but placed in groups the interaction between the pieces made powerful compositions. 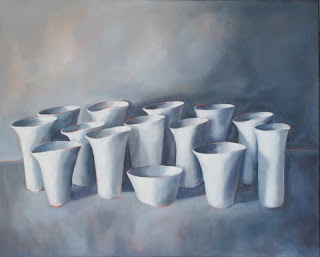 I began the painting with a deep burnt sienna ground – it seemed logical to tie the paintings to the colour of clay, and then worked up the shapes leaving hints of the sienna here and there. As I painted, the forms seemed to take on liveliness and began to dance. 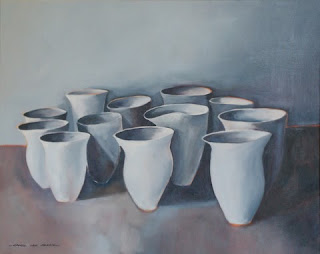 An interesting observation came from Gwyn herself, on seeing photographs of the paintings, was that she enjoyed the fact that her ceramics that had been originally inspired by paintings (those by Morandi) should in turn now inspire new paintings.

Note: Blogger is doing it's own thing regarding line spacing!!