Artist’s Studios fascinate other artists, collectors and art historians so I thought I would give you a glimpse into my studio. It’s a smallish space - I have banished my car and taken over the garage for my studio. An air-conditioner has been installed to prevent me melting in the heat of the Australian summer, and to any painting fumes. However, I am careful to use odourless solvents and mediums and where possible to open up the doors and let in the fresh outside air. 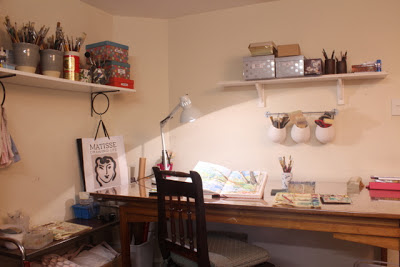 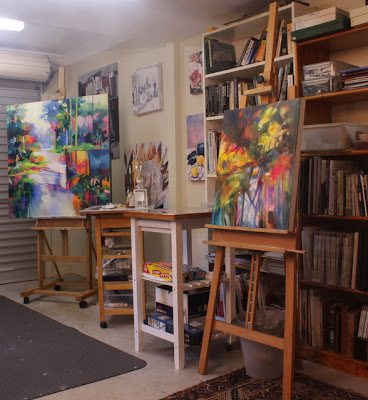 Looking at images of artist's studios reveal a multitude of approaches to studio design. There is the 'nothing gets moved/cleaned/thrown away' variety and also the pristine clinically clean and tidy kind. I must confess I didn't find too many of those!

I think I tend to fall somewhere in between. At heart I am practical and tidy. When I'm working materials go everywhere with abandon.Then I have to tidy up. OK, it's confession time - I have to make room for my students... 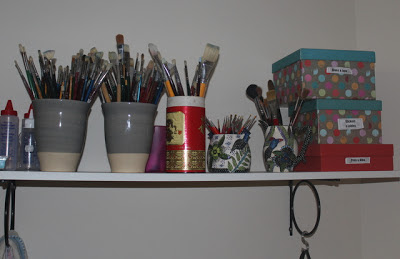 When I was unpacking my boxes some favourites were the two Ardmore ceramic pieces. I bought the bowl and jug  many years ago(pictured above). This was before the Studio found fame on the world arena, and when they were (sort of) affordable. I decided immediately that instead of hiding them away in a cupboard I would use them in the studio to store my watercolour brushes.

This video is an interview with David Dawson provides not only a glimpse into Lucien Freud’s Studio but his way of working and personality as well. 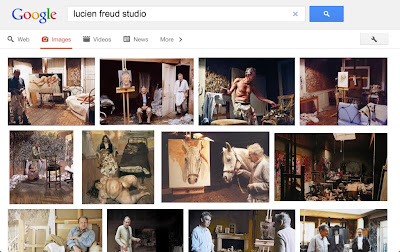 I find the images of the studio of Francis Bacon quite disturbing - I couldn't  in my wildest dreams work in a studio that wasn't organised. 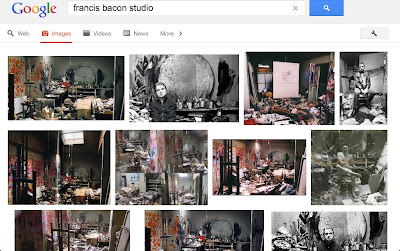 The piles of stuff would literally drive me crazy. I must confess to having a “be kind to brushes” phobia - I cannot bear to see brushes abandoned in tins, encrusted with paint. I need a clean palette and lovingly cleaned brushes.