A few months ago I saw some sketchbooks done by artist friends. These were part of The Sketchbook Project 2012. I’ve kept sketchbooks as long as I can remember. Mostly, they’ve been travel sketchbooks when I’ve had time to sit and draw. One thing I’ve never done is a sketchbook with a single theme, designed, planned and executed from cover to cover.
The idea intrigued me. I was too late for the 2012 project as entries were fully subscribed and in any case there was insufficient time to complete the project.

However, a new project had just opened. The Sketchbook Project Limited Edition Vol.1 is a collaborative series of art books created by 5,000 artists from around the world. I signed up, chose my theme and waited impatiently for the sketchbook to arrive in the post. 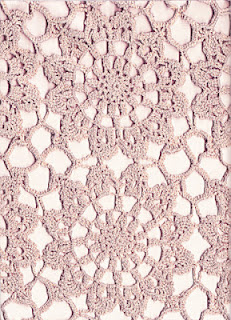 The cover pays homage to my Mother - it features an example of her masterful crochet work. I took a direct scan from a tablecloth she made.

The theme I chose was Thread and Surface. The opportunity to explore mixed media in the project excited me. The sketchbook duly arrived. I must confess to a little disappointment initially. I knew what size the book would be but I soon realised that the paper would not stand up to any dramatic media exploration. In fact, even a light watercolour wash was tricky.

So - a change of plan was needed. I know what you are thinking - just replace the paper with something more suitable - thicker more robust paper. Since making hand bound journals is not one of my accomplishments, and because my frugal nature baulked at throwing out the original pages, I decided to work with what I had.

My initial concept was to use the idea of thread as the thread of my life - tracing my life from surface to surface in South Africa and finally from continent to continent as I moved from Africa to Australia. As I view my life here I am often in a contest between the two places. Part of me is here, happy in Brisbane; part of me remains and always will remain in South Africa.

I recently read a book by Rachel Powers called The Divided Heart: Art and Motherhood : a divided heart: a split self; the sense that to succeed at one means to fail at the other.
There's the dilemma faced by an artist when she becomes a mother. There’s the strong maternal pull to bond with your child and there’s the need to separate oneself from the child in order to create. In my case it was a little different; my children are grown up but I was leaving part of my family to live a creative life in another country, so it seemed to be a fitting title for my Sketchbook. 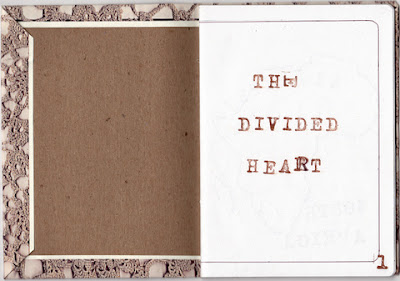 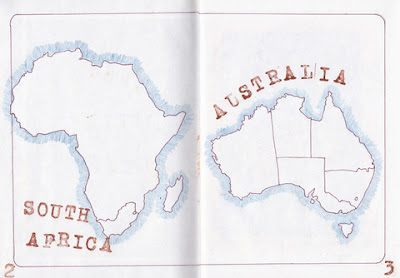 When I drew the maps I was taken back to Geography class many years ago - my favourite part was adding blue sea around the land.

Part  2 to follow:
My heart is in two Countries - I discuss the planning and process