When I was writing the previous post about the Lethbridge 10,000 and the current theme of my paintings, I realised something. I realised that somehow, surreptitiously, I had become a landscape painter.

I hadn't been in Australia for very long, maybe six or eight months, when I drove up the coast to Mooloolaba to have a look. Previously, rocks had featured in a number of paintings and I wanted to find something here in Australia to kick start a new series. The day seemed fine when I set off but when I arrived it was cloudy and gloomy. I took a lot of photos of the pounding sea and the rocks.

Then I wandered into a gallery - The Gallery Beneath and chatted to the owner. I explained to her that I had come up from Brisbane, having recently arrived in Australia, looking for inspiration.

She turned to me and said:
"You can't look for inspiration, you've got to feel it here," holding her hand over her heart.

Her words took me by surprise and I almost felt chastised, as though my explorative outing was in some way false. And perhaps it was. The couple of paintings I did from those photographs were not very good at all. I needed to do more than take some photographs to understand a place. 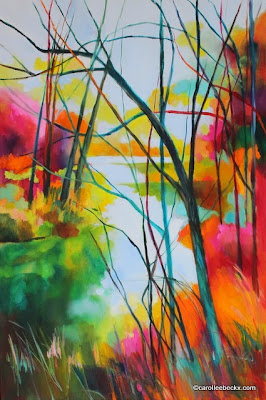 Her words have stayed with me and I've thought about them often - she was absolutely correct. I really needed to be here longer, to live in the country and to let the special places find me rather than the other way around.

When I look at the paintings done over the last few years - Riverside Trees, Windarra Reflections,  and Bunya Riverside and  I see that the landscape has become part of me and that inspiration has found me after all.