There was much excitement at the USK Brisbane sketch crawl this morning. Our group was to be filmed for the Channel 7 TV programme The Great South East, which features people and places in SE  Queensland.

Needless to say there was a bumper turnout. While we waited for the film crew to arrive, I started a quick ink sketch of the General Post Office. I wanted to get a feel for the building and decide how to tackle the building in the larger sketch.

It's a building with three sections. The left hand side with the clock face is the original building, although the clock was originally on the centre Tower section and was later moved. The right side of the building was added later and matches the left side. We were in relative calm sitting in Post Office square across the road.

I decided to concentrate on the original building.I loved the fact that the trees obscured quite a lot of the complex building. There was a also a lot of traffic on the road in front of me - trucks, delivery vans and crowds of people moving about, so a lot of editing took place.

While I started my sketch some of the other sketchers were interviewed. I decided on a loose watercolour wash of the main shapes so I would have something to work on when they came to talk to me.

Fortunately I had a fair bit of the sketch started when it was my turn to be interviewed, so I didn't have to face a blank page. Carole Horne, the Producer asked me to "assist" the presenter, Blair Allsop with his sketch and give him a few tips on starting. The crew were with us for a couple of hours and then went on to shoot footage of some of the sketches we had done in other locations around the city. 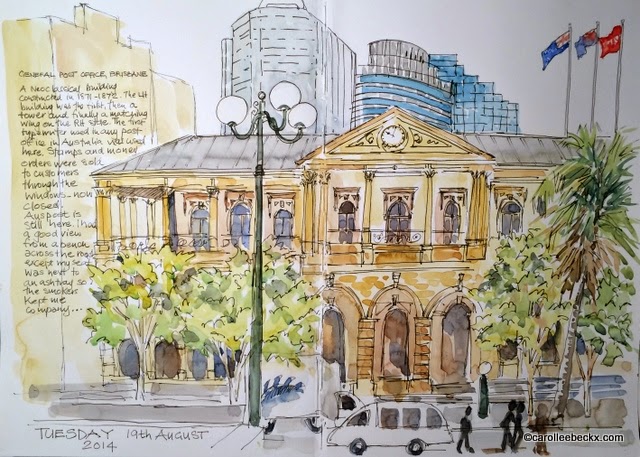 If you live in Queensland make sure you tune in to Channel Seven on a Sunday afternoon at 5.30pm. We will get some notice of when the segment will air - most likely in about four weeks so I'll let you know when it's on.

After all effort that I am sure our fame will most likely only amount to three or four minutes in total.