Visitors to my Garden

One of the most rewarding things about my garden has been that I have had such interesting visitors. I woke early one morning to hear a strange sound – not a bird – something different – I peeped out of the window and saw a mongoose sitting up surveying the garden. Then another popped his head up, and another – until there must have fifteen or so in the garden.
Although I tried not to move or make any noise, suddenly they became aware that someone was watching. Startled, they ran off into the bush on the other side of the road . The magical moment was over.
The mongoose family was too quick for my camera, but the Vervet monkeys come almost daily. They run along the wall, on to the roof and jump into the large Natal Mahogany tree. The youngsters run along the branches right to the end and jump or almost fall out of the tree. Then they do it all over again. 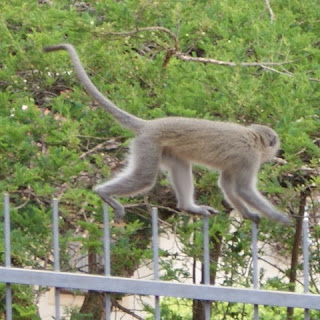 Most stop to drink water from a large ceramic bowl, then run along the fence before running into the bush across the road. A few days ago the troop spent a long time playing. It  seemed as though they were showing off for me. 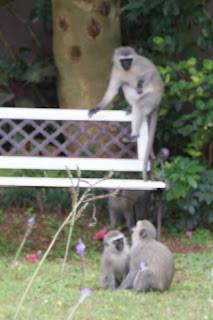 I wasn't really prepared to shoot them playing - I should have taken a video of them, but these photos give an idea of the fun they were having. 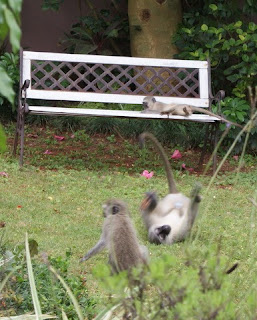 Later on I wanted to photograph a painting so I had gone out on to the patio where I could use natural light. I was standing taking photos when I felt something near me. I looked up and there, a couple of metres from me, was a Wooly necked stork, completely at ease and quite unconcerned by my presence. He wandered around looking for insects so I was able to get a few photos. 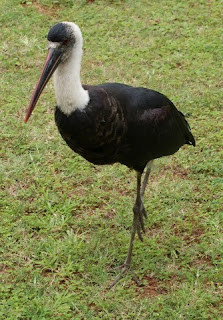 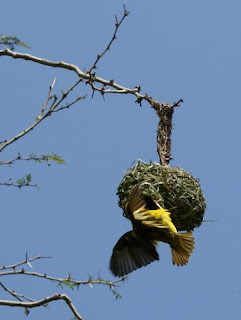 But the women are so fussy – every day quite a few nests are found to be sub-standard and rejected, only to lie abandoned on the ground – the poor males just have to start again. 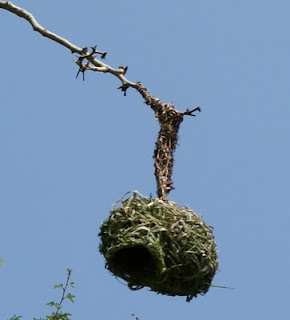 Then there are a few special flowers. There is the Crinum lily that made its eventual appearance after growing for a number of years without a flower.
At the moment another beauty is a wonderful purple iris. The plant itself it rather unremarkable - it has green strap-like leaves that for most of the year are quite boring. Then the plant starts to bloom and magic happens.Each bloom lasts only a day before fading. 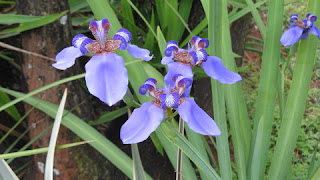 A day or two later, one is rewarded with another few blooms. Eventually where the blooms have been leaves shoot out and that can be cut off to grow into a new plant. I received my first plant from a friend, and I have been able to give  new plants to others.

I'll be sad to leave but I have great memories. Now I look forward to new adventures in Brisbane.
Posted by Art Matters at 16:41